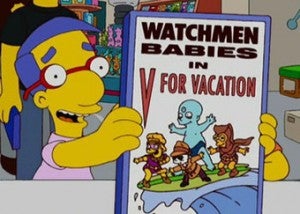 Bleeding Cool has been reporting for years on the possibility of a follow-up to Alan Moore and Dave Gibbons's Watchmen. The 1986 original remains one of DC's best-selling graphic novels year after year and spawned a big-budget film adaptation by Zack Snyder, the director behind 300 and the upcoming Man of Steel. Critically, it remains one of the most respected and beloved superhero comics ever made, and the idea of making a sequel has largely been panned by fans and, according to various articles, Paul Levitz, the former president and publisher at DC who had reportedly stood in the way of such projects in the past.

This week has seen significant movement in those longstanding rumors, though, with the site reporting that DC is developing four prequel miniseries featuring characters from the landmark maxi-series which will be overseen by Darwyn Cooke and feature the work of a number of fairly high-profile creators. While nobody but Cooke can be confirmed by Bleeding Cool's anonymous sources, the article certainly seems to suggest that after his guest stint on Action Comics early next year, Andy Kubert will be taking his talents to one of the miniseries. Other names mentioned are original series artist and co-creator Dave Gibbons (who has worked on various DC projects as well as the Watchmen film in the recent past), John Higgins, J. Michael Straczynski and J.G. Jones.

Earlier in the week, Bleeding Cool had reported on these and other (since-discredited) names attached to the project, which was currently in development and has been given the in-house title of "Panic Room," an apparent wink-and-a-nod to the fan outcry they could face if the project goes public prematurely, or isn't well-received once completed.

While a Watchmen follow-up certainly is one of the crazier, gutsier things DC could do, the recent success of their bold and controversial New 52 initiative may well have given supporters of the idea the encouragement they needed to move forward with what's likely to be a top-selling project regardless of how it's received by fans and critics. If, however, it manages to be an all-around success it could develop into more evergreen collected editions for DC and perhaps even a second film for Warner Brothers, who built sequel clauses into the contracts of the first film's principal cast.

Is Watchmen 2 Finally a Go?

One Piece Dangles a Big Mom Mystery with Latest Chapter