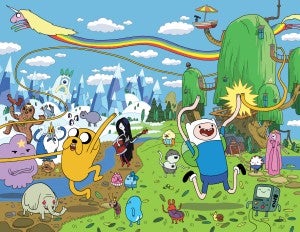 , the hit comedy currently gearing up for a third season on Cartoon Network, will be coming to comic stores in February courtesy a new, ongoing comic series from BOOM! Studios. Written by Dinosaur Comics's Ryan North and featuring art by Boom! regular Shelli Paroline, the series will present original stories featuring the characters from the TV series in an all-ages, monthly comic book format. "It was like a bomb dropped in the office when we announced Adventure Time," BOOM! Studios Editor-in-Chief Matt Gagnon said in a press release. "Everyone at BOOM! was just as excited as any fan. Adventure Time is such a classic story at its heart- a boy and his dog on different adventures – but the genius of the show allows us to take a simple concept and get really creative with the presentation. Everyone we've worked with is a huge fan of the show and creator Pen Ward has been instrumental in bringing this comic book to life. " BOOM! seems a curious fit for the series; even though they've had great success with similar licensed all-ages properties like their fantastic Muppets and Darkwing Duck series, Cartoon Network has an established relationship with DC Comics, which has seen a number of comics like Batman: The Brave and the Bold as well as Powerpuff Girls and other Cartoon Network-owned properties. DC recently launched a new Green Lantern animated series on the network as well as their "DC Nation" programming block. BOOM!, presumably, could simply offer the project a level of priority and promotion that a bigger publisher could not. "It's quite exciting to bring this series to comics. My wife and I are huge fans and sing Marceline's 'Daddy, why'd you eat my fries?' song around the house all the time," BOOM! Studios Founder and Chief Executive Officer Ross Richie wrote in the same statement. "Pendleton Ward has created a brilliantly original voice in this show and it's a true 'All Ages' property that appeals both to kids and also has a substantial amount of adult fans. Watch for the waving snail!"

It's ADVENTURE TIME at Boom! in February