Last night saw the debut of iZombie from Veronica Mars producers Rob Thomas and Diane Ruggiero-Wright, a new series on The CW based on the Vertigo series from writer Chris Roberson and artist Michael Allred.

And just before it aired, Roberson took to Tumblr with some comments about not only the TV series, but the genesis of the comic book as well, sharing some of Allred's earliest art from six years ago before the comic launched.

Check it out below... 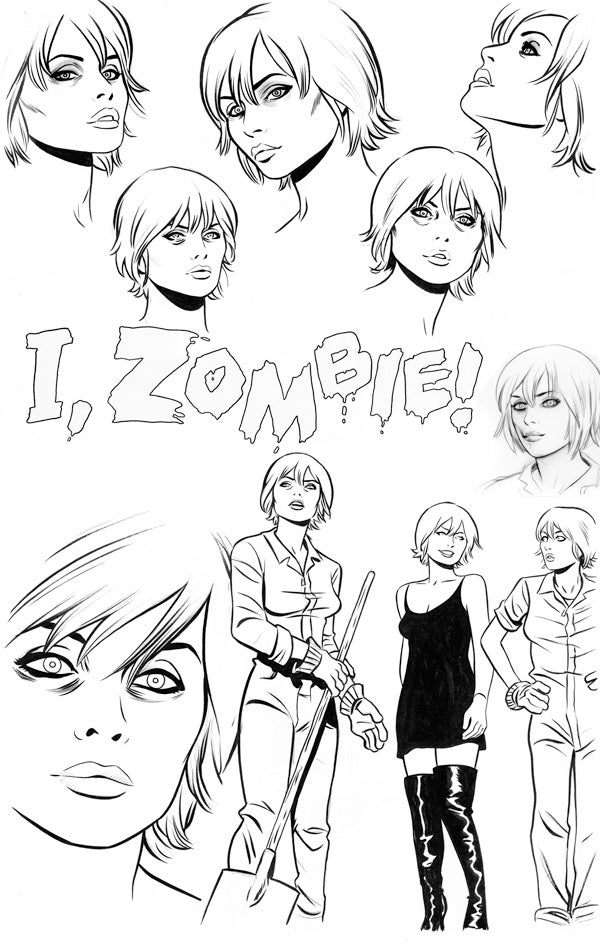 Six years ago this month I had an idea for a comic book series. It was about a young female zombie who is able to pass for a living person when she eats the brains of the dead, but in doing so she inherit the dead person's memories and has to settle any unfinished business they left behind—solving their murder, telling estranged family members that they loved them, stuff like that. I pitched the idea to Shelly Bond at Vertigo in March '09. By the end of the month, Mike Allred was attached as artist and co-creator (and his wife Laura Allred as colorist), and by the beginning of May we were in business. The series ended up running for 28 issues, with contributions from guest artists like Darwyn Cooke, Gilbert Hernandez, Jay Stephens, J. Bone, and Jim Rugg. It was an incredible amount of fun to write, and I felt like the luckiest kid in comics just for getting the chance to do it.

Now, almost six years to the day that I first came up with the idea, a new version developed by Rob Thomas and Diane Ruggiero-Wright is set to debut on the CW network. I've seen the first four episodes of the series, and they're fantastic.

(Above is the first bit of iZombie art that I saw, back in the spring of '09 when Mike was first developing the look of the characters. This was the first time that I began to suspect that this thing might actually be happening…)

iZombie airs Tuesdays at 9 p.m. ET/PT on The CW.

Let the Right One In Series Adds Sin City Star