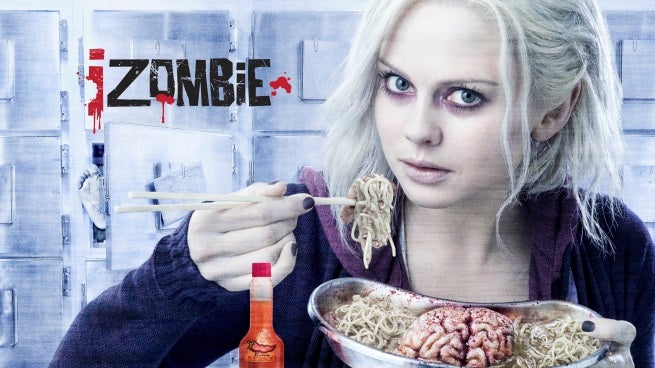 The CW has released the official synopsis for the pilot episode of iZombie.

Based on the fan-favorite series from DC Comics' Vertigo imprint, writer Chris Roberson and artist Mike Allred, iZombie follows the adventures of a pretty young woman who is turned into a zombie and must consume brains in order to stave off her savage nature. When she does, however, something amazing happens...!

You can check it out below. iZombie premieres on March 17.

A NEW SERIES FROM THE BRAINS BEHIND "VERONICA MARS" — Olivia "Liv" Moore (Rose McIver, "Masters of Sex," "Once Upon a Time") was a disciplined, over-achieving medical resident who had her life path completely mapped out…until she is turned into a zombie. Now stuck somewhere between half-alive and undead, Liv loses her drive and ambition. She breaks off her engagement with charming soul mate Major (Robert Buckley, "One Tree Hill"), fearful of infecting him with her condition. Liv transfers her medical residency to the city morgue in order to access the only form of sustenance left available to her – the only thing that allows her to maintain her humanity – brains. There are side effects to Liv's new diet: With each brain Liv consumes, she experiences "visions" – flashes of the corpse's memories – which often provide clues as to how they were killed. Her boss, the brilliant but eccentric Dr. Ravi Chakrabarti (Rahul Kohli), encourages her to embrace this gift and to work with unproven homicide detective, Clive Babineaux, (Malcolm Goodwin, "True Blood"), to help solve these murders. In doing so, Liv finds a measure of peace, and a new sense of purpose in what her "life" has now become. David Anders also stars. Rob Thomas directed the episode written by Rob Thomas and Diane Ruggiero-Wright (#101). Original airdate 3/17/2015.