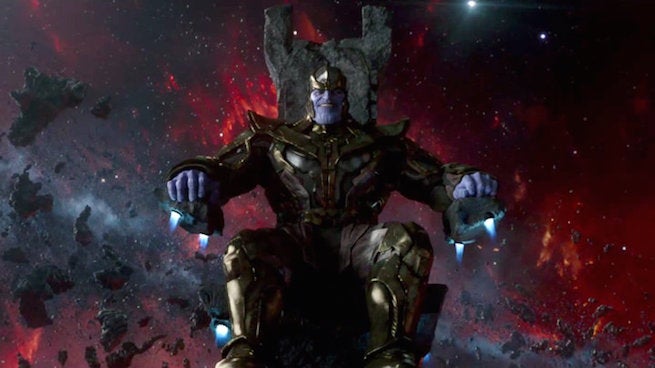 Writer/Director James Gunn says of all of the scenes in Guardians of the Galaxy, the one featuring Thanos was the most difficult to write.

In an interview with Vulture, he explains the challenges bringing the intergalactic super villain to life.

"Oh, I hate this! This is terrible, terrible," Gunn said. "What I don't like is that if you ask me which scenes were the hardest, they're also the ones that, frankly, I like the least. I really would love to talk about, say, the "12 percent" scene and say that was the most difficult, but no, I kinda sat down and wrote that dialogue and then it was done."

The director added, "There's pressure with Thanos because you're setting up this gigantic character that, in one way, isn't really a part of your movie. His presence doesn't really serve being in Guardians, and having Thanos be in that scene was more helpful to the Marvel Universe than it was to Guardians of the Galaxy. I always wanted to have Thanos in there, but from a structural standpoint, you don't need him. So that's part of it, and then part of it is the fact that you're setting up this incredibly powerful character, but you don't want to belittle the actual antagonist of the film, which is Ronan. You don't want him to seem like a big wussy. So how do you make that work?"

The Guardians director added that despite the difficulty of the scene, it led to a satisfying payoff.