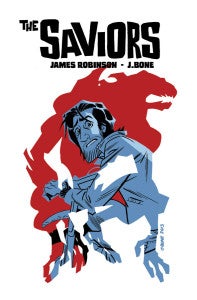 Longtime DC stalwart James Robinson will return to creator-owned comics in December with his new series The Saviors, featuring art by J. Bone, from Image Comics. Coming to stores the week of the Christmas holiday, the series will introduce readers to Tomas Ramirez. He has a nice job at a gas station, the cops don't give him any trouble, and the weather's nice. Life is easy, and Tomas likes easy. But when he stumbles upon an extraterrestrial conspiracy to take over the world, his life becomes anything but easy. He's thrown into a fight for the future of the Earth against an unstoppable threat, and his only hope is to find allies before it's too late. The Saviors will be the only title shipping from Image Comics on the week of the Christmas holiday. "It's great to be doing a series where anything goes. Where a character can seem the main focus for several issues only to die suddenly," said Robinson. "Where an arc can end and another begin in a different part of the world with a different cast and focus. Where an up-coming arc might even focus on the aliens' perspective. To be able to do something with so very few rules is very liberating and a lot of fun." "I'd always wanted to draw a horror/monster book in my cartoon style, but told as a straight up scary story," said Bone. "After some long phone calls and email exchanges, James came back with a terrific Monster in the Desert story that just hit me right in the nostalgia. I love old black-and-white horror movies—guys in rubber suits, teens racing through the desert on dune buggies and convertibles. The old sheriff called in because someone's killing all farmer Jones's cattle. That's the kind of story James wrote except with quite a few modern twists." Robinson, who recently left DC's Earth 2, is also launching All-New Invaders for Marvel.