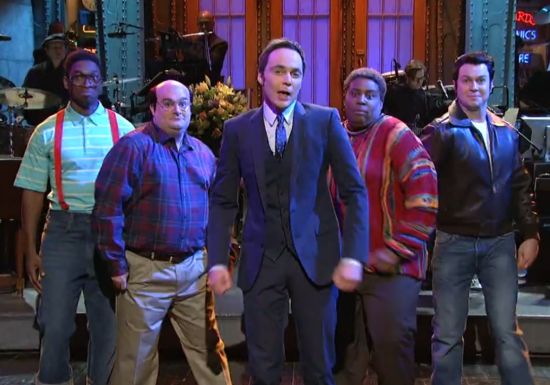 On last night's Saturday Night Live, The Big Bang Theory's Jim Parsons treated the live audience to a song during his monologue. "We've done seven seasons now of my show The Big Bang Theory," said Parsons. "And when you've done that many shows, I find people have a difficult time separating you from your character." "I am not like Sheldon," added Parsons. "I'm not a scientist. I don't speak Klingon. I do have a male roommate, but I assure you it's a vastly different arrangement." Then, Parsons broke into a song, explaining how he's not that guy that people see on TV on The Big Bang Theory. "I'm not that guy. I'm a well-adjusted man, not a Star Trek superfan," sang Parsons. Check out the entire video of the song below, which also includes appearances by other well-known TV characters such as Urkel, George Costanza, The Fonz, Bill Cosby, and Jessica Fletcher.

Jim Parsons Sings About Not Being Sheldon Cooper On SNL