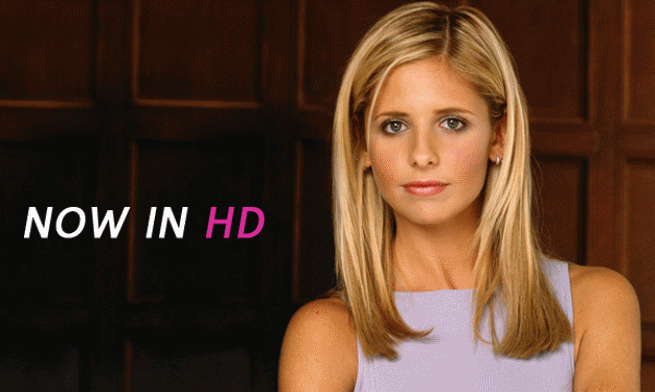 One might think that fans of Buffy the Vampire Slayer would be overjoyed with Fox remastering the series in HD. One would be wrong.

As reported by Vox (via the Verge), Fox’s 16:9 HD remaster, which is currently being used for Buffy reruns on Pivot, has caused numerous errors that would never have appeared in Buffy’s original 4:3 format, including being able to see members of the production crew in shots, such as in the library shot below (original shot on the left, remaster on the right).

Additionally, in an attempt to make the picture clearer, Fox has removed filters from certain nighttime scenes that made them appear appropriately dark. For example, in the scene below, you can see how, in the remaster, the vampire Angel should surely be bursting into flames by now.

Additionally, in order to fill the differently shaped television screens of the modern era, the HD remaster zooms in on the episode, drastically altering the look of certain shots.

You can see more side-by-side comparisons at the Buffy Blu-ray Facebook fan page, and in the video below:

So how does Buffy creator Joss Whedon feel about Fox’s remaster? Judging by his one tweet about the matter, he doesn’t seem to be a fan:

Standard definition to high definition transitions have been the source of much discussion for television fans and the industry. Most recently, HBO’s decision to alter The Wire’s aspect ratio for HD rerelease has caused a stir. However, it should be noted that the job can be done well. While not perfect, CBS’s HD remaster of Star Trek: The Next Generation for Blu-ray release has been widely well received, but CBS clearly put a lot work, time, and attention to detail into the job, while Fox has not done the same for Buffy.