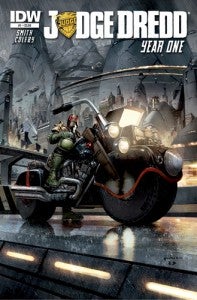 There have been rumors for a while, but IDW and 2000 AD officially announced Judge Dredd Year One this morning, a miniseries beginning in March by Matt Smith and Simon Coleby with Greg Staples on covers. Variant covers will be provided by Dave Sim and Carlos Ezquerra. "Dredd's a notoriously difficult character to get the voice right—and it becomes even more of a challenge when you're writing him as an eighteen year old, fresh out of the Academy," said Matt Smith. "But it's been great fun charting his early cases, feeding into the stories the elements that will go on to make him Mega-City's most feared lawman. And it's terrific to have Simon Coleby on board, a superb artist and well experienced in portraying the madness of the future metropolis." The first issue of IDW's Judge Dredd, the first American take on the character in about a decade, rolled out in November to strong sales and reviews. The series, written by Duane Swierczynski, follows on the heels of a critically-acclaimed feature film based on the character this summer. Smith, the Editor-in-Chief of 2000 AD, released a short e-book in August titled Judge Dredd Year One: City Fathers. 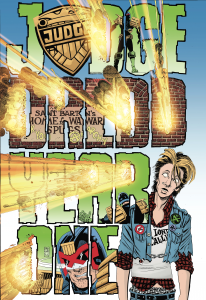 "Matt Smith has been doing a masterful job of steering Judge Dredd's exploits for years, and his e-novella showed he was equally adept at serving as chronicler as well as editor," said Chris Ryall, IDW's Chief Creative Officer/Editor-in-Chief. "And the story Matt's telling in this miniseries is a very different tale of Dredd's first year than his prose story, but both combine to add relevant details and backstory to the character of Judge Dredd."