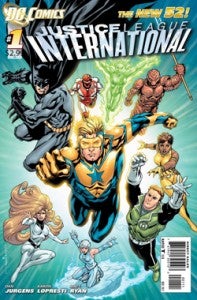 It's amazing how things change. One day you're the laughing stock, the next you're having the last laugh. You're the windshield one day and the bug the next. While many may look back at the late 1980s created Justice League which morphed into the Justice League International, they may see a roster of characters, with the notable exception of Batman, that may appear second-rate at first, but they miss the rich character of the people who inhabited that team, such as Green Lantern Guy Gardner and Booster Gold. For those who were fans of the team, fear not. And for those who dismiss the team as a collection of B-listers with no depth, throw all that out the window. The first issue of the DC relaunch JLI is far and way already intriguing, complex and out of the gate exciting. The timeliness of a team such as this is truly genius, and already in this premiere issue, clashes over leadership, personality flareups occur, and so much more.

No time at all is wasted in this opening issue, as very quickly we see Andre Briggs, head of intelligence for the United Nations, engaged in a chat with other world leaders about creating a super team of their very own. With international security and tensions between countries running high, a team cherry picked from superheroes across the globe seems to be a strategic move, but also a convenient cover for the U.N. in case things go wrong, as the team becomes a handy scapegoat if that ever happens. The team certainly has international flavor, with heroes such as Ice, August General in Iron, Godiva, Fire, Ice and Vixen chosen, with none other than Booster Gold chosen to lead them. With a hostile public objecting this new league using the Hall of Justice as their base and a group of missing UN research team member deep in Peru, things quickly get heated.

Most of the issue is spent integrating this team of very headstrong personalities, with the headstrong Godiva, Russian Rocket Red clashing with China's August General in Iron, and Guy Gardener openly rejecting Booster as leader, writer Dan Jurgens has a lot to juggle, but he does so naturally and with a conversational ease that helps carry the issue. Each character gets their moment to demonstrate just how they approach this new endeavor, especially out in the field looking for the missing researchers, who seem to have vanished into the earth itself. Batman is also a tangental part of the team, but more so as an interesting support for Booster, who is not hitting on all cylinders as the team leader. A cracking start to this team's origin is just what this group of supporting characters needs to make themselves a cornerstone of this new DCU. So far, DC is two for two with their team books, as, like Justice League of America #1, this issue establishes a sensational team and promises to be a fun read with plenty of action against a complex and politically dangerous world. Grade: A