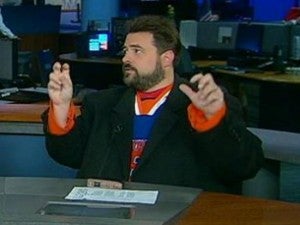 While Marvel is issuing press releases assuring fans that the Spider-Man changes that occur in Amazing Spider-Man #700 will not disappear any time soon, no one seems to be buying it. In an appearance on FOX LA, Kevin Smith shared his thoughts on the controversial comic book story line which involves the death of Peter Parker.

Kevin Smith said, “Don’t worry. Even if Dan Slott had done twenty pages of Peter Parker being gutted by Doc Ock, Doc Ock just playing in his guts and stuff, trust me, in one year’s time Peter Parker will be Spider-Man again. That’s the beauty of comic books. In comic books, there are no finites. There are no absolutes. With the exception maybe of, well I guess some people have to stay dead, like Uncle Ben has to stay dead because then there is no Spider-Man.”