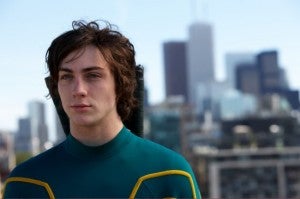 In a recent interview with Comic Book Resources, John Romita Jr., artist for the popular series Kick-Ass, suggested that the book and the film are heading in directions that may not correlate, as each begins to reach its respective conclusion in the near future. In discussing where he is in completing work on the comic book version of this work, Romita said that he had just about wrapped things up with issue seven and would hope to continue his work on issue eight very soon, the series' final issue. Even though this is a very brief series, and film production on it began some time ago, Romita went on to say that he understood things might be different between his and writer Mark Millar's version of the events and what director Michael Vaughn wanted in the film version. "Things have to be independent because, as [Millar] made the great point, we don't want to look like we're 'demagoging' the film and trying to capitalize on it. We didn't want to do that," he said. When Romita got to visit the set of the film recently, he was given a chance to read the screenplay and he seemed quite pleased, "They know what they're doing, but I'm sticking to Mark's scripts. Mark's scripts have a little bit of a different feel from the director and the screenwriters. We don't want to be so far disparate from the film, and we had a little bit of storytelling we wanted to at least parallel the film even though it was Mark's idea from the get go to give it some similarities while not looking like we're hocking each other. As long as it looks like the same subject matter, the endings will have differences." His access to the film's screenplay had its reasons. Romita's work will be used to produce flashback sequences for the film, something Vaughn, as a fan of the series, wanted to do to pay homage to the work. With this announcement, how will fans of the series feel? The book already has a highly strange publication schedule, and with word that the film is going to take a different turn than the book, will fans feel jilted and annoyed, especially considering their patience in regards to the book? That remains to be seen, but in the end result, will it matter?