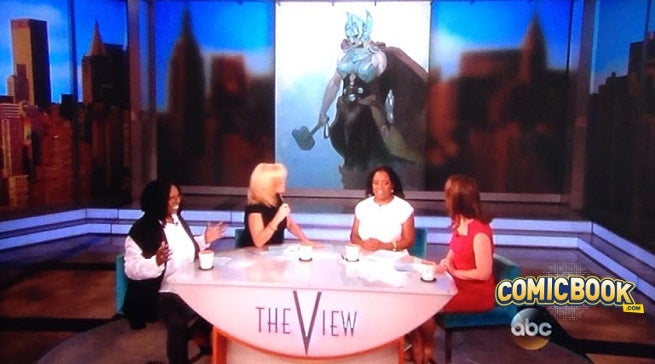 Marvel Comics have announced a new title called Thor, featuring a female lead, on the ABC talk show The View.

Editor's note: We originally misunderstood the title to be called Lady Thor but that is in fact just the Asgardian honorific, like "Lady Sif." The book will be called Thor.

.@Marvel announces that Thor is no longer worthy of Mjolnir, and now a woman will be wielding the mighty Uru Hammer! #TheView

There have, of course, been plenty of notable female Asgardians in recent history. A character called Thor Girl, created by Dan Jurgens during his acclaimed run on the title, had a role to play in the recent Fear Itself crossover. Valkyrie, whose costume looks very similar to Lady Thor's, appeared in both Fear Itself and Fearless Defenders recently.

During the currently-ongoing Original Sin event miniseries, it was revealed that Angela is actually the sister of Thor and Loki. Without definitive word as to who's in the Thor costume above, there is already some speculation online that she could be taking Mjolnir. That seems unlikely given her aversion to all things Asgardian, but certainly somebody like Jane Foster -- who exists in the movie universe and has a long history with Thor -- could work.

It's not totally clear whether this will be an all-new title, a continuation of Thor: God of Thunder or a relaunch of same. Certainly it seems likely to tie into recent teasers that have shown a Thor-like figure carrying a different Asgardian weapon.

More details on the move, what it means for the publisher and the character, can be found here.

My Hero Academia: Where is Chapter 331?