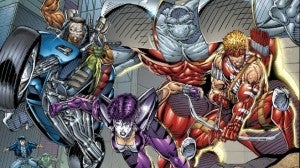 Nearly three years after it was first announced, it appears as though a film adaptation of Rob Liefeld's Youngblood comics is finally moving forward, according to comments the writer/artist made on Twitter earlier tonight.

The film, expected to be produced by Brett Ratner of X-Men: The Last Stand fame and directed by Liefeld himself as of the last reported rumors, had been trapped in development hell for some time. According to comments Ratner made in a November MTV interview, "There were some rights issues. We actually waited for over a year for the rights to these comic books that were made by independent comic books. There was a lot of owners of these comic books and a lot of people were claiming they had the rights. It’s taken a long time but I think we’ve finally cleared the legal part of it."

That faith on Ratner's part seems justified now; just after 9pm EST today, Liefeld tweeted, "Just got off of a fantastic call per the Youngblood movie. After 3 years of dealmaking we are moving forward!"

With Liefeld overseeing the relaunch of the Extreme imprint at Image as well as taking on what appears to be a greatly increased role at DC, it will be interesting to see to what extent he can be actively involved in a Youngblood film; directing would seem on the face of it to be out of the question, unless he wanted to leave some of his other work behind, but Hi-Fi Color's as Brian Miller recently told Panel Discussions, Liefeld "has a motor. He'll call at 2 AM or 4 AM and he's up drawing." Who knows? Maybe long days on set and late nights at the drawing board are in Liefeld's future...!