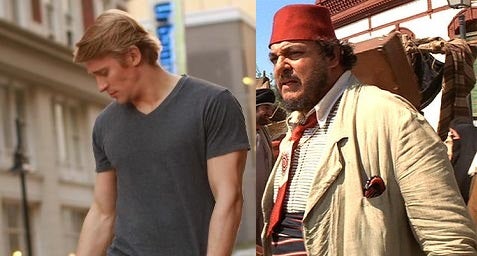 Two days after its panel at Comic-Con, ABC’s Once Upon A Time announced the casting yesterday of Lord of the Rings veteran John Rhys-Davies and Shameless's Tyler Jacob Moore.

Rhys-Davies, also known for his role in Raiders Of The Lost Ark, will voice Pabbie the Troll King, and Moore (Shameless, GCB) will play the scheming Prince Hans, according to tweets by series producer Adam Horowitz (embedded below).

We're thrilled to welcome John Rhys-Davies to the #OnceUponATime family as the voice of everyone's favorite rock troll -- Pabbie! #ThisFall!

Excited to welcome @tylerjacobmoore to #OnceUponATime as #Frozen's Hans. Hope you come meet him this fall in Season 4!

At least Moore is explicitly a member of the Frozen cast, and given the focus on Frozen so far this season, it seems likely that Rhys-Davies's character is part of the same story.

The series returns for its fourth season on September 28.