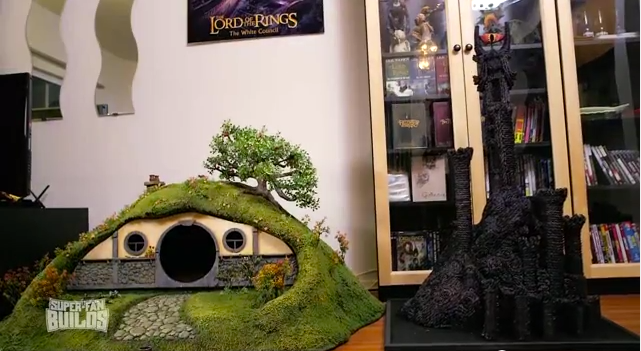 There’s no need to make a stink about The Hobbit’s grand finale today.

That’s because, somewhere out there, exists a Hobbit-themed litter box. And along with a special Lord of the Rings cat scratching post, even felines are getting in on the Tolkien love this week. The custom pieces of J.R.R. Tolkien memorabilia were made for Middle Earth's biggest fan on SUPER-FAN BUILDS, a series where professional craftsmen make unique nerdy memorabilia for fans.

In the series’ latest installment, Tim Baker, a Hollywood designer and prop maker, constructed the Middle Earth-worthy litter box and scratching post from apoxie and fiberglasss. With the help of his team at Tim Baker Creations, Tim crafted a litter box that resembles the Baggins’ comfy home in the Shire, and a towering scratching post to resemble the Eye of Sauron. We suspect that no amount of dark magic is resistant to powers of kitty claws.

Check out each prop's construction in the video below as a warmup for The Hobbit: The Battle of the Five Armies.

The Hobbit: The Battle of the Five Armies hits theaters today. But let’s be honest. If you had a choice, you’d totally take the litter box instead.