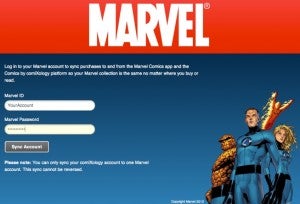 Marvel Comics and ComiXology today released a joint statement that finally gives the fans one of the things they've asked for most frequently from the Marvel Comics App: ComiXology syncing for purchases.

While the Marvel-branded app has been powered by ComiXology's sytem since it rolled out, until now anything you bought on one app did not automatically transfer to the others. This has alternately been very frustrating for some readers or (as in the case of this reporter) rendered the Marvel app essentially worthless. It also jives with the comments Marvel made to ComicBook.com earlier in the week, suggesting that more of their Marvel NOW! titles would come with free digital copies included.

“This is just another step towards providing the best customer experience for all comic buyers no matter where they buy their Marvel comics,” said comiXology co-founder and CEO David Steinberger. “Fans can now not only read all their Marvel purchases on their Marvel Comics app and comiXology app and use both apps to get the latest can’t-miss super hero epics every week.”

One interesting wrinkle is that Marvel has collected editions available via their branded app that will also now synch to your ComiXology account; rights surrounding the collected editions have sometimes been a bone of contention between the publishers and Apple, makers of the iPhone and iPad, who would prefer that everyone buy through their system and so don't support things like graphic novels on your Barnes & Noble Nook or Amazon Kindle apps.

The program begins immediately, so your Marvel purchases should sync to your ComiXology account (or the other way around, if you're nasty) the next time you update.