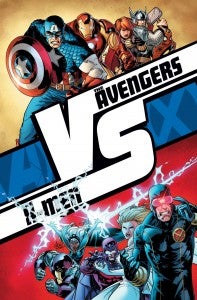 Tired of decompressed storytelling, where everything takes six issues to happen and nobody ever seems to be moving? Well, as if Avengers Vs. X-Men wasn't enough of a guaranteed action orgy, yesterday Marvel announced a tie-in miniseries simply titled Versus. All this book will do, according to Executive Editor Tom Brevoort, is elaborate on the fights seen in the main book. "AvX: Versus is the least essential read of AvX, but it will probably be the most bestselling[sic]," Brevoort told the media at yesterday's Next Big Thing press conference call (as reported by Comic Book Resources). "It is literally the fight book." The series seems to be a widescreen version of Wizard magazine's old Last Man Standing feature. The various editors on Marvel's conference call all said that fans wanted more fights, and that's what they're getting--and it makes sense. The last time Marvel's superheroes faced off against one another in a big way (in Civil War), the tie-in minis were very plot-intensive and light on the action. This meant that the brief (often less than a page) battles seen on the page of the main book were all there was to the action, and it had a Marvel Vs. DC feel to it, where the fights themselves were lost in the shuffle, almost an afterthought to who would win them. This new announcement seems to suggest that Avengers Vs. X-Men will pan out much the same way, but that Marvel has finally deferred to the "we want more fights" contingent and created a tie-in series that will be more, not less, like what they're hoping to get in their big, widescreen adventure series. This time around, according to Brevoort, there will be no "Front Line" tie-in as he said an everyday person narrating the events didn't seem as appealing when the premise is just a bunch of superheroes punching each other. 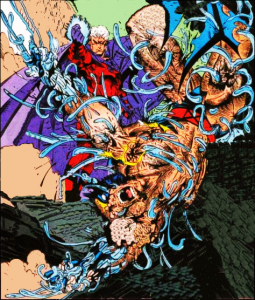 The "fight book" will be a 12-issue miniseries written and drawn by a revolving cast of creators, presumably but not explicitly the creators already revolving on Avengers Vs. X-Men. According to CBR, each issue will include a pair of fights, each by a different creative team. The first issue will feature Iron Man facing off against Magneto (does anybody remember what happened the last time someone who relied heavily on metal to make his powers work had a knock-down, drag-out fight with ol' Mags? Check it out at right if you want. Ironically, the issue where that happened was drawn by Andy Kubert, the brother of AvX: Versus #1 artist Adam. The second story, also according to CBR, will see Namor facing off against The Thing. Are either of those characters was an Avenger or an X-Man? Does it even matter? And speaking of comics families, that second issue will be written and drawn by husband and wife team Katherine and Stuart Immonen.