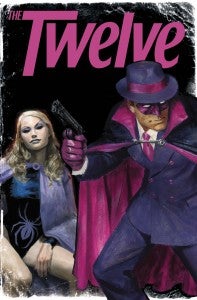 It wasn't long ago that artist Chris Weston made headlines by tweeting an image to Bleeding Cool founder Rich Johnston that strongly implied he had finished drawing The Twelve. The J. Michael Straczynski-penned series, which began in 2008, features a dozen characters from the Golden Age of Marvel Comics's predecessor Timely Comics, struggling to adapt after waking up in the modern world. Widely considered one of the best comic series of the last decade, the series was put on hold after the eighth issue shipped in late 2008 and there was a good deal of fan speculation as to whether the rest of the series would ever see the light of day. Featuring covers by Kaare Andrews, The Twelve--which Marvel's SVP/Executive Editor Tom Brevoort calls "one of the best reviewed, best beloved and long-awaited series Marvel has ever produced," will return to stores in 2012 and finally come to an end. "It's taken a long while, but finally, FINALLY, the balance of The Twelve has been completed and we're ready to ship it all to our long-suffering fans," said Brevoort in a statement. "We appreciate everybody's patience, and both hope and expect that the conclusion will live up to the wait." For fans who have heard great things about The Twelve but haven't ever read the book, Marvel is making the first volume of the series--collecting issues #1-6, available for the first time in paperback in January. February will then see the release of The Twelve: Marvel Must-Have #1, which will collect #7 and 8 and bring new readers current, as well as the ninth and tenth issues of the series, after which the series will return to a monthly schedule, ending in April.

Marvel Announces The Conclusion of THE TWELVE