While it's already pretty well-established that the Tesseract from Marvel's The Avengers, the MacGuffins in Thor: The Dark World, Guardians of the Galaxy and more will turn out either to be, or at least to  be related to, the gems that power the Infinity Gauntlet, all building to something massive down the line, it seems as though the five familiar gems from the comic books won't necessarily be represented the way fans recognize them.

The response came after a fan asked Marvel's Ryan Penagos--better known as "Agent M," the Executive Editorial Director for Marvel Digital Media Group and Marvel.com, and someone who spends a lot of time teasing developments in the films and on Agents of S.H.I.E.L.D.--what the stones/gems are that we've already seen.

"Has Marvel official said which Infinity Gem correlates with the two we've seen in film so far? Aether = Power? Tesseract = Space? Or is that question truly truly outrageous?" thomasav asked on Tumblr. 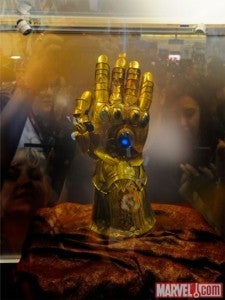 Ignoring or missing the fact that he made a "Jem is truly outrageous" pun there that Agent M apparently didn't catch or enjoy as much as we did, Penagos's response is potentially telling in terms of how Marvel plans to move forward--and is likely to irritate some purists.

"No, we haven’t," he told the fan. "Don’t stress on them needing to be 1:1 with the comics. Different stories, different media, etc."

Of course, any time there's a change made for the film, it's likely to get a small, vocal group of fans up in arms. This time it could be particularly frustrating for those who were convinced they had an idea of what these items were leading up to; at San Diego Comic Con International, reporters were trying to get just these sorts of details out of James Gunn, whose Guardians of the Galaxy features an "orb" that sounds suspiciously like something that could become a weapon of Thanos.

Marvel Cinematic Universe's Infinity Gems May Have Their Own Rules

New Rumor Suggests Made In Abyss Will Reach Its Climax Soon

Jackass Star Reveals He Had Coronavirus