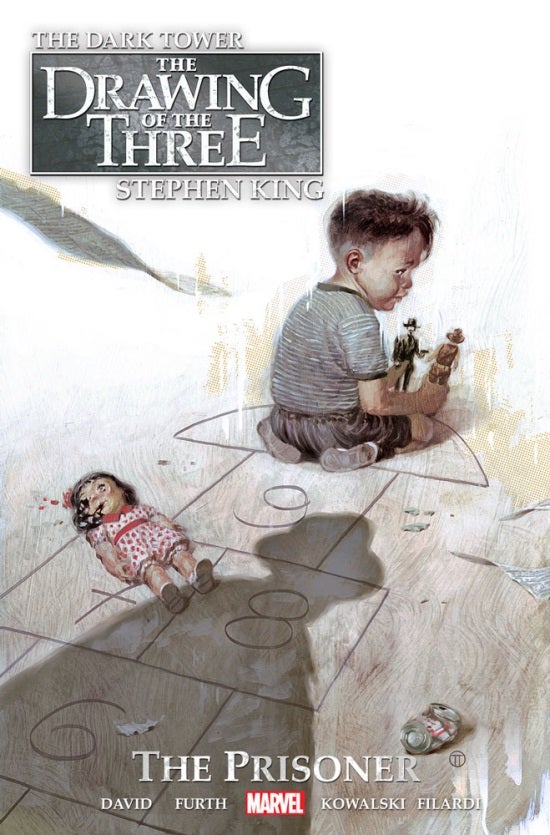 Marvel Comics and Stephen King have announced The Dark Tower: The Drawing of the Three – The Prisoner, the next series in Marvel's ongoing comic book adaptation of King's Dark Tower novels. The new series is written by Peter David & Robin Furth and features art by Piotr Kowalski. The first issue is scheduled to release in September. Having completed the comic book adaptation of the first novel in the Dark Tower series,  The Gunslinger, The Prisoner begins adapting King's second novel in the series, The Drawing of the Three. Here's the synopsis provided by Marvel: As this tale of urban crime opens, you'll meet Eddie Dean as an innocent child who grows into a troubled young man gifted with the ability to open doors to other worlds. Can he survive family tragedy, a haunting addiction, and the deadly forces that conspire to stop him from challenging the Man in Black? Eddie faces trials and tribulations at every turn – and the badlands of Mid-World can't hold a candle to the dangers of Brooklyn in the 1960s! Witness the story of a young man on the path to an unlikely destiny and the most important journey of his life. "To borrow some successful branding, this is the 'All-New Marvel NOW' version of The Dark Tower. As we now travel from The Gunslinger to The Drawing of The Three, we are refocusing our spotlight to explore the histories and events that led to the formation of the Ka-Tet that aided the gunslinger Roland Deschain on his quest to defeat the Man in Black and the Crimson King," said editor Bill Rosemann. "But instead of encountering Eddie Dean later in his life, as you do in the novel, we zoom back to 1964 and meet him as a toddler, so while we are adapting the second novel, we're weaving together events in a new way that will hopefully surprise and entertain everyone who has already read the book. We're 'assembling the Avengers' of the Dark Tower universe, but Robin Furth, Peter David, and Piotr Kowalski are doing so in a way that you've never imagined." The Dark Tower: The Drawing of the Three – The Prisoner #1 ships this September.

Marvel Comics And Stephen King Announce The Dark Tower: The Drawing Of The Three - The Prisoner