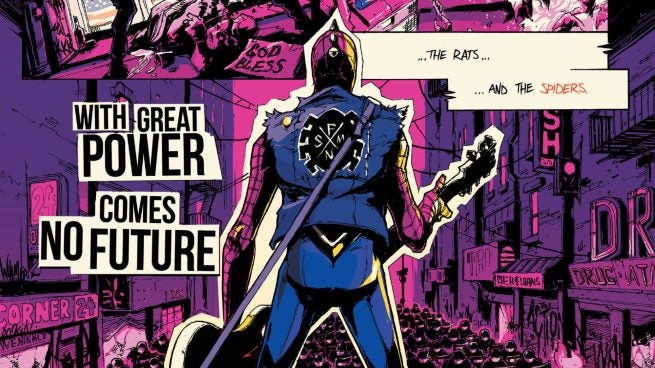 There’s no future for this Spider-Man. Marvel Comics has revealed, via MTV, the latest version of Spidey to be introduced during the Spider-Verse mega event, Punk Spider-Man, a version of the character who exists in a world inspired by the music of bands like The Clash and the Sex Pistols. Punk Spider-Man will debut in Spider-Verse #2, and appear in the mobile game Spider-Man Unlimited shortly thereafter.

“Marvel was great at constantly sending us new upcoming content and plans for the Spider-Verse event,” Gameloft’s Tatiana says, “and I remember having a huge smile on my face upon seeing those early black and white drawings for Spider-Punk.”

“Punk rock and hardcore has been my thing since I was a kid,” MacKay said, “so I was really excited to make a Spider-Man comic that was totally informed by that ethos of anti-authoritarianism, revolt and heart. And yeah, we got excited to have Spider-Man fight the president and the cops.”

Spider-Punk’s secret identity is not the traditional Peter Parker, but one that will be revealed as more fitting of a punk rock inspired universe, and one that will reportedly “make total sense” to longtime Spider-Man fans.

The idea of a megacorporation like Marvel or Disney creating a truly “punk” story is a bit oxymoronic, and that’s a fact that McKay acknowledges.

“It’s a comic about a punk, not a punk comic,” Mackay says. “And that’s a fine distinction, to be sure, but an important one. However, this is a story that punk kids, historically the mohawked hoodlums that got their teeth kicked in by heroes in the comics in the 80s, can actually see themselves as the hero of, and maybe it’ll get them scrabbling their own punk zine-comics together.

“Anyways, speaking of selling out, how are the ratings for ‘My Super Sweet 16′?”

Could Spider-Punk have the same potential as an ongoing character that Marvel saw in Spider-Gwen? Mackay is hopeful.

“Provided our Spidey lives through Spider-Verse, it would be fun to see him stick around the Marvel Universe,” MacKay concluded. “I don’t know if he’ll record an album, but he will certainly do some house shows and maybe a VA hall, probably with the Gwen Stacy Spider-Woman on drums!” 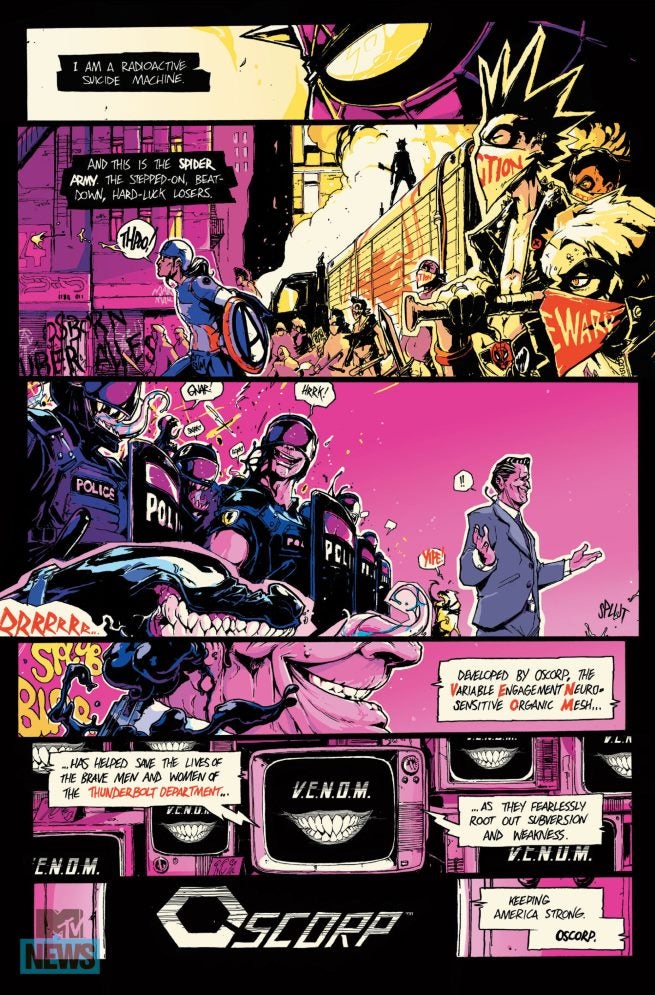 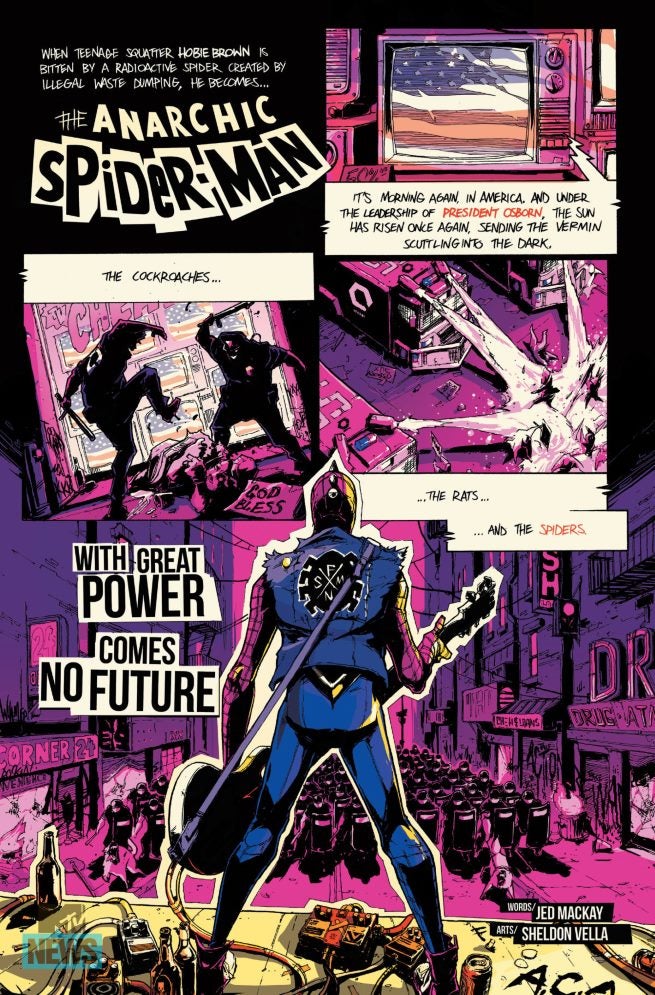 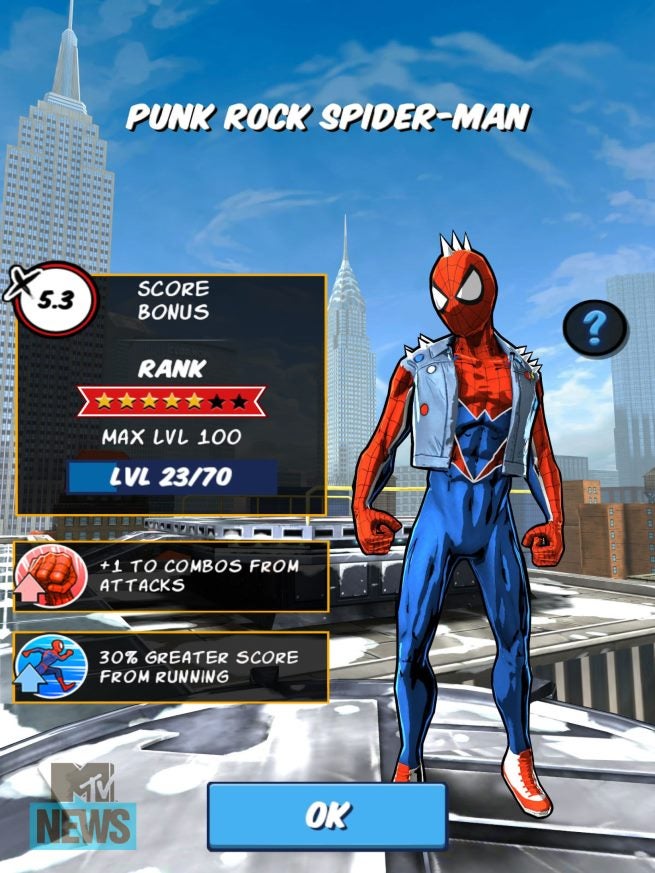 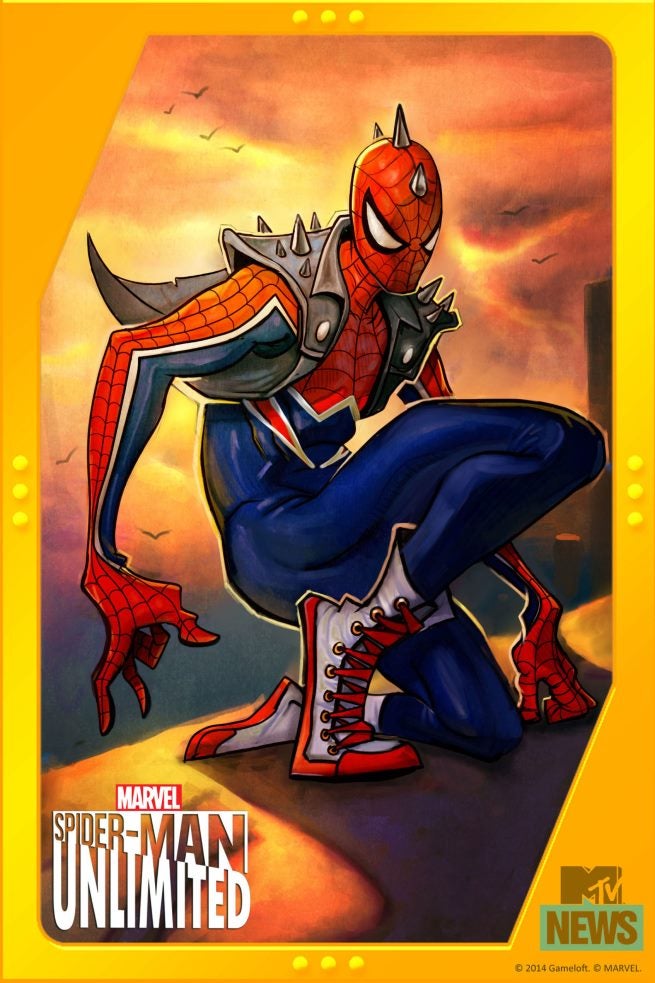