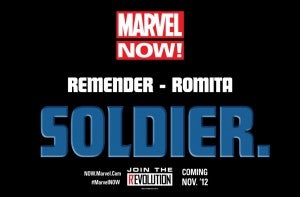 Two new Marvel NOW! teasers have popped up on the Internet since the last pair arrived this morning. The messages this time? "Soldier," with a creative team of Rick Remender and John Romita Jr., and "Legacy," featuring Si Spurrier and Tan Eng Huat.

Popular theories are that the "Soldier" teaser is announcing a new Captain America series (seems a no-brainer, unless someone will be rolling out a new super-soldier series in the wake of AvX), and that the "Legacy" ad is for a new X-Men book, probably spinning out of the events of the soon-to-be-cancelled X-Men Legacy. All but Huat had been projected to work on those titles for some time now by Internet rumors coming out of Bleeding Cool. 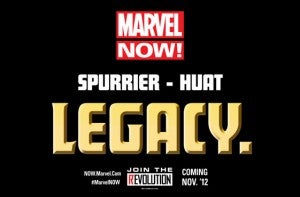 Remender and Romita, of course, have both been contributing to Avengers vs. X-Men, which puts them in the position of having just recently worked not only on Captain America but on just about every Marvel title. Spurrier has long been rumored to take over an X-title, and is a fan favorite.