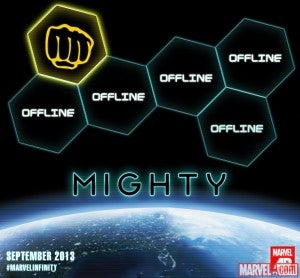 Marvel Comics will spin a new team out of their upcoming Infinity event miniseries--and while it's not yet clear what the team will be, they'll be "Mighty," according to the teaser shown at left.

The team will apparently feature six characters, one of whom is Luke Cage (so that will immediately beg the question of a connection to the possible Brian Michael Bendis/Mike Deodato Heroes For Hire book that was teased a while back).

"Welcome to our first Mighty teaser, the first teaser about this new project coming up, that we'll be telling you about all week," Marvel senior vice president of publishing and Infinity editor Tom Brevoort says in the message unlocked when you point your Marvel AR app at the image at left. "During his tenure with the New Avengers, Luke Cage became the moral center of the team. While he's now retired from being an active Avenger because of the need to raise his daughter in a safer environment, the call to arms, and the catastrophe that is Infinity forces him to get back up off the bench and pull together a bunch of other characters to be the Avengers when no one else can. Luke's the one character with the gravitas and the wherewithal to make this happen."

This is the second title expected to spin out of Infinity, with the first being an Inhumans title, presumably written by Matt Fraction.

Fraction's 2011 event Fear Itself included a team of superheroes, including Cage's longtime foil Iron Fist, given Asgardian weapons and dubbed "The Mighty." That event, while not hugely commercially successful, has already launched one Marvel NOW! title in the form of Cullen Bunn's Fearless Defenders.

Infinity kicks off in August. Written by Jonathan Hickman and illustrated by Jim Cheung, Jerome Opeña and Dustin Weaver, starts in August, it sees the Avengers, The Inhumans and the rest of the Marvel Universe fighting a war on two fronts, with Earth's Mightiest Heroes taken into space while Thanos attacks Earth in their absence.

Marvel to Launch a "Mighty" Team Out of Infinity Event

Beyond Good and Evil 2 Release Date Is Still Years Away