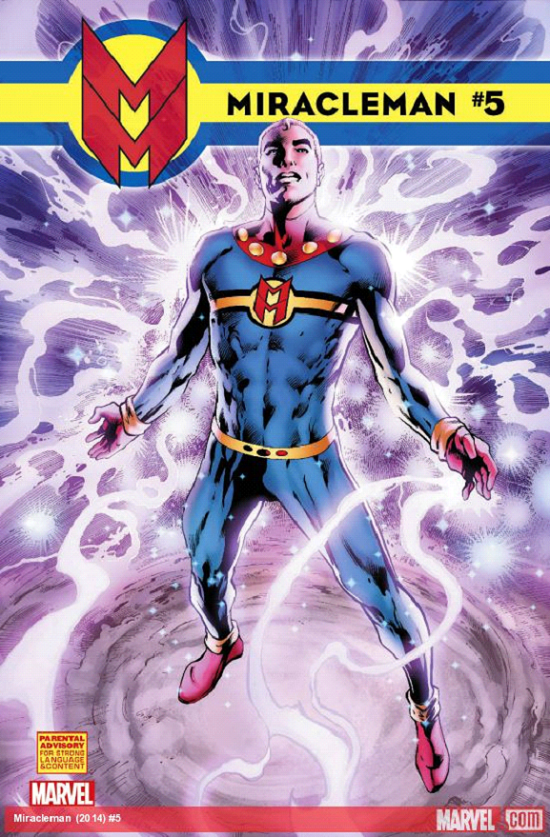 Another issue of Miracleman, another heaping of praise upon the creative team. As this series goes on, I see more and more why this story earned such acclaim when it first enthralled readers in the pages of Warrior way back in that period of ancient history called the 1980s. Each issue shows improvement both in Alan Moore's writing and in Alan Davis' artwork. It's quite instructive to be able to look at the early work of such giants of the comic book medium. Fascinatingly, they both demonstrate immense talent and ability even in these relatively early days. Marvel's Miracleman #5 collects three chapters of the Miracleman story originally published in three successive issues of Warrior in 1983. An additional chapter consists of a Young Miracleman story simply titled "1957." All of these chapters work very well, building the story as well as interest in reading its successive chapters. Overall, there is an intriguing mix of foreshadowing, mystery, intrigue, and thoughtful character interaction and development. 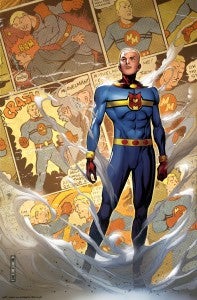 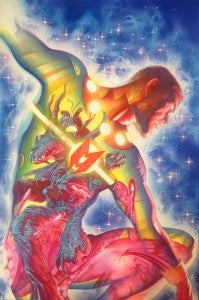 If I had a complaint about Davis, it would be that his modern cover for this issue is slightly lame. Don't get me wrong, it's a beautifully rendered shot of Miracleman seemingly just finishing his transformation and thus surrounded by glowing energy. However, it's fairly static and has no real connection with the content of this issue. That being said, I have actually picked up the Alex Ross variant cover for this issue. I hate variant covers with a passion but as this one was the same price as the standard cover, I thought it worth the expense to own this lovely artwork. I'm not entirely sure that I understand the significance of the form that exists within Miracleman's silhouette (is it the alien whose crashed ship provided the technology to create Miracleman?) but Ross's work is beautiful if suffering from what I'd identify as his slightly questionable color work. I will never understand why Ross insist upon having some colors seem to act as a light source and shade areas of the piece that don't benefit from it. Here, there is an excess of pervasive highlighter-yellow and Easter-egg-pink that somewhat take away from the overall effect. Still, I thought it worth picking up the variant. As for the back matter, readers are treated to the now-standard collection of house ads, original pencils and inks, and some classic Marvelman reprints. They are all welcome additions that serve to beef up the package and give this a feeling of being the definitive reprinting of this series. If I had one complaint, it would be that I would appreciate the occasional prose piece accompanying these issues. A reflection on the original printing of Miracleman and the impact it had on the industry would really help to provide additional context for the work. Still, what's given is quite good. In particular, with Gargunza finally making an appearance in the main story, it is fitting that his first appearance in Marvelman #27 is reprinted here. It's an enjoyably goofy and nonsensical story about "skeletons" in "cupboards" and it does help give some background on the classic Gargunza in terms of the types of schemes he attempted to perpetrate. Overall, there is remarkably little to complain about to critique in this issue. It is another excellent issue in an excellent series of reprints of a story that (by all accounts) was excellent when it was originally printed. I'm still looking forward to more and if you aren't reading this by now, then what are you waiting for?

Marvel's Miracleman #5 Deserves to Be Read