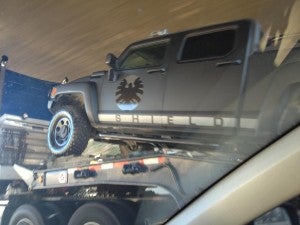 The Joss Whedon-directed pilot episode for Marvel's S.H.I.E.L.D. will reportedly begin filming this week, and a number of Los Angeles natives are seeing vehicles designed for the series around Los Angeles. Comic Book Movie tracked down the image at right and, in response, one of their commenters posted another, somewhat more complete picture that can be seen below. The series is set to star Clark Gregg as Agent Phil Coulson, a role he previously played in the Iron Man and Thor films, as well as Marvel's The Avengers, in which the character appeared to have died. 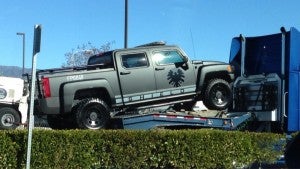 It seems likely that if the pilot is picked up to series, Gregg will take the lead on Marvel Studios's TV front while his role in the feature films is more or less filled by Cobie Smulders, who plays S.H.I.E.L.D. Agent Maria Hill. Both Gregg and Smulders come from a TV background; Gregg  starred in The New Adventures of Old Christine while Smulders currently stars in How I Met Your Mother. The upcoming Captain America: The Winter Soldier will also reportedly introduce Sharon Carter, S.H.I.E.L.D. Agent 13, as Cap's love interest.

PlayStation Plus Slammed by Subscribers as Sony Hits "New Low"

Star Wars: Did The Mandalorian Ruin The Book of Boba Fett?