In a really interesting and insightful interview, Matthew Vaughn, director of 'Kick-Ass', talks about the film to AICN.Some tidbits (because you'll want to read the entire thing): His thoughts on the film:

"Well, the good news is I think we pulled it off. I don't want to sound too arrogant about the thing because there's nothing worse than someone saying, "I made the best damn movie of all time!", then you watch it, and you go, "Yeah..." I can say this... not that it means much... but it's definitely the best movie I've ever made. That doesn't mean it's a great film. But, for me, I think I punched above my weight."

On the recent test screening:

"We just test screened [KICK-ASS] three days ago, and I can genuinely say what LOCK, STOCK did for gangster movies, we're doing for comic book/superhero films…The test scores... I'm not even going to tell you what they were because you wouldn't believe me. They were just phenomenal. And two of the things that were singled out for praise was that it was unique - it was like nothing anyone had seen before - and that it was fun." 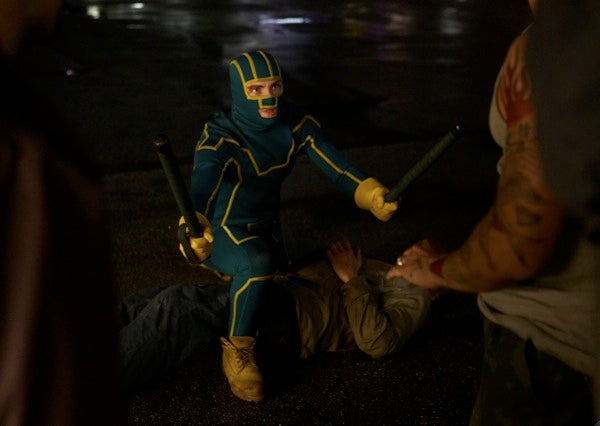 Regarding Aaron Johnson, who plays Dave/Kick-Ass:

"He has that charisma where you believe every word he says. He can also stand in front of the camera and say nothing, but you still want to watch him. He's fun. The actor I think he'll become is Robert Downey, Jr. He's very similar to him."

On a possible release date:

"I don't want to tempt fate, but I would say we'll probably copy the 300 model of watching it for the first time at Comic Con, fingers crossed people like what they see, and, if they do, build off of that and release in the first quarter of next year during spring break."