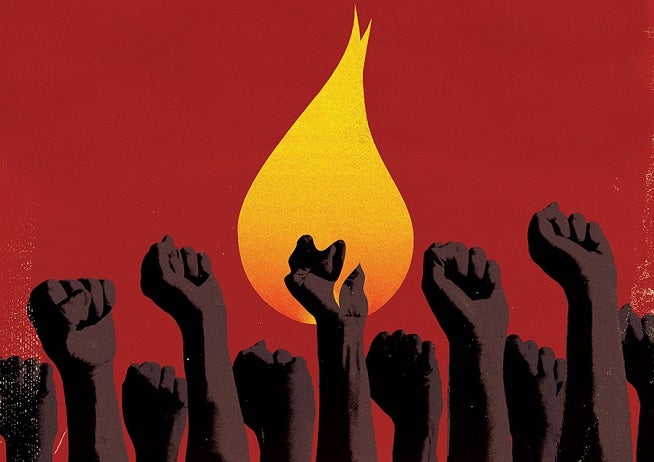 The project, which sees a world dominated by truly despicable characters that Bemis says have utterly lost their values, wraps up in an unsurprisingly violent finale that leaves open as many doors as it closes...but don't hold your breath for a sequel anytime soon.

Bemis joined ComicBook.com for a brief conversation about the finale, his influences in the series and what it means to him to have wrapped a creator-owned comics epic. 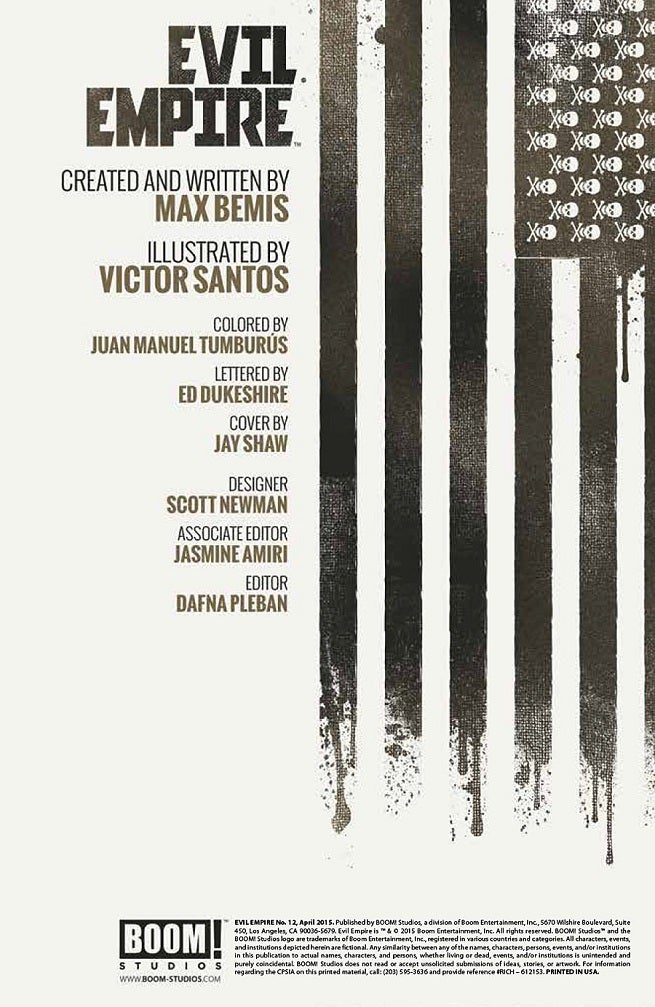 How does it feel to have a project like this completed? It has to be like completing a novel or an album, in a way that individual issues may not be.

I've always been someone who falls behind and then once I'm behind, waits for the story's completion to read it, especially a book like this.

When Scalped finished up, I basically stopped reading it about three quarters of the way in, knowing that there was going to be a conclusion. Sometimes when they announce a conclusion, I stop reading until it's all over and then pick it up in trade.

So knowing that, I'm excited to see who's attracted to the series, even in a few years when it's just a few trade paperbacks you can pick up. I think there's something to be said for that.

Can you talk a little about what Victor Santos brought to the table for the finale? Usually I'm very critical of art with few or no backgrounds, but it's clear in that the final issue it wasn't a lack of effort but part of a design aesthetic. Did you talk with him about that beforehand? 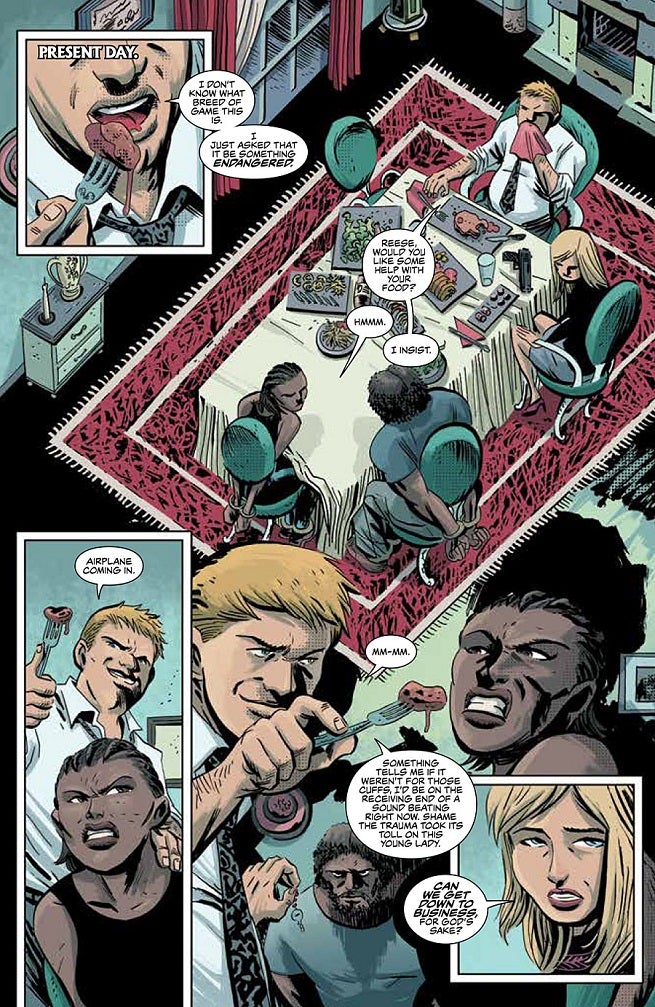 It wasn't scripted. I don't harp over details like that too much. I harp over emotional beats and I harp over the feeling that I want the art to evoke: "The reader should feel blahblahbah, this is where we really do it to them, in this panel."  It's never like "in the background there's four books and one of them is an Encyclopedia Britannica from an incomplete edition...."

Also Victor comes from the school of emotionally evocative art. I know that was actually a big change for a lot of readers in the book but to be honest as much as I adore the work of the artist that came before him, [Victor] arguably did the best work on the book. It is an emotional story.

I've never envisioned Evil Empire being so true to life that it's like a snapshot. I wanted it to be an exaggerated story. It is something that could happen but let's be honest, in all likelihood it's not going to happen. I felt like the art should be dynamic and exciting.

Obviously the ending of Evil Empire is one that leaves some things open for elaboration but is principally a pretty definitive and satisfying conclusion. Would you want to revisit the world of these characters again if you had the chance? 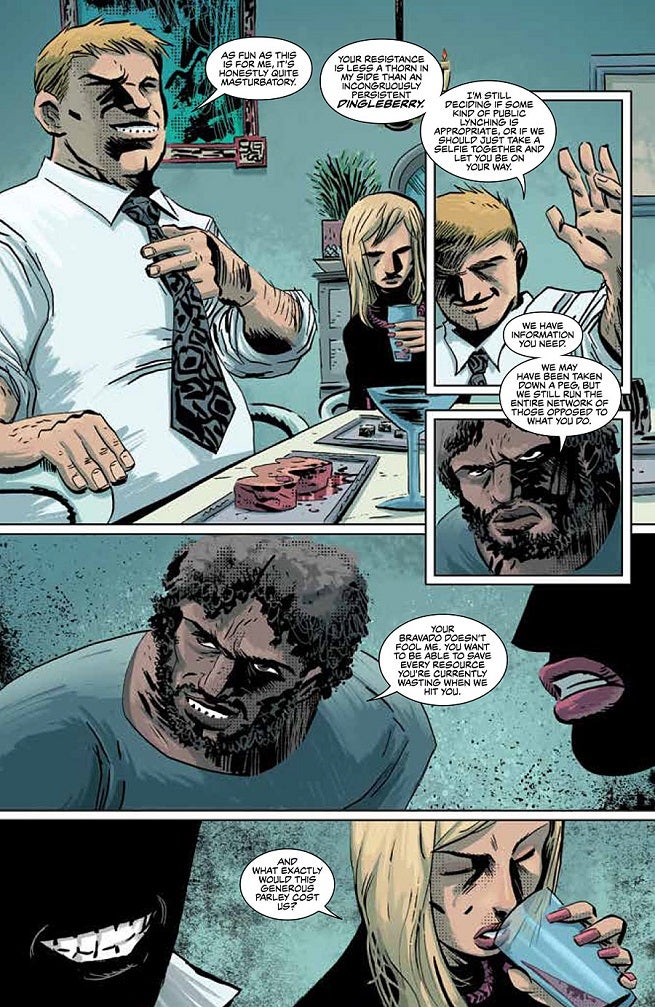 I want it to be seen as a satisfying ending. At the same time if this book ends up a legacy thing, which right now obviously it's not -- right now it's had a lot of success critically but it hasn't sold a million copies -- but if there was a demand, I could definitely see myself going back and revisiting the world, whether it takes place after or during the series but I wouldn't count on that.

I wrote it to be self-contained and though the ending is ambiguous, I wanted to leave it that way for a reason. I feel like life is never really that open and shut. The rest of the book was pretty true-to-life in many respects, so I didn't want to have a really depressing ending or a really happy ending in that regard. That was the idea.

Definitely I think a lot of people would be satisfied. There was no way to nuke or have some kind of crazy bomb that turns everybody back to normal and society regains its values. Certain things I wanted to feel climactic and I feel we achieved that, definitely, but those are the important things to conclude, not necessarily the entire narrative of "the world is screwed up." That's an ongoing narrative in everyone's lives and every time you come up with a solution, there's new problems.

To me, it's always the personal relationships that make up the true narrative of any book. Over the course of a series, you get to see a character grow in a certain way and then they're going to move on and grow in another way once the series is over, or they're dead. That's kind of what happens. 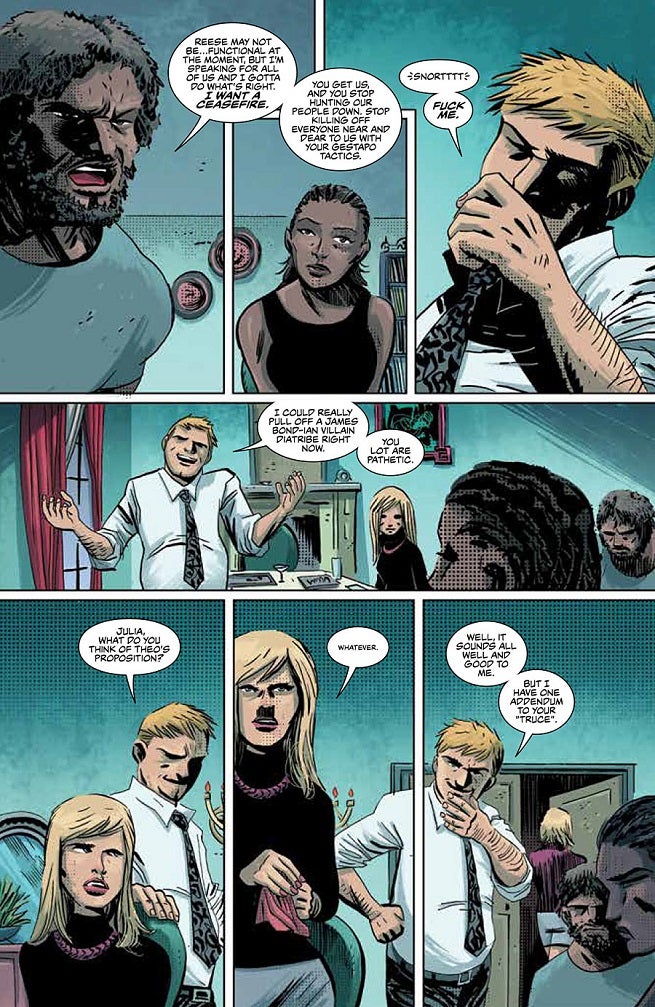 Early on, I remember a lot of comparisons to things like The Matrix and other kind of "evil has won!" type of stories but it reminds me more of Young Liars by David Lapham. Who were some of your influences?

Thank you. That means a lot, because I really liked that book. Lapham in general was a huge influence on the book. In fact, I've just started working with Avatar, where Lapham has done a lot of great work over the years, but originally there was a period where I wasn't sure if BOOM! was going to be willing to pitch a mature readers series and I was going to pitch it to Avatar because of the Lapham connection.

It's very informed by that mentality of creating characters who are ugly, but there's a human quality to it all. I'm less hardcore than him, though. I think that Reese and Theo and a few other characters are cool enough that they don't go into Lapham territory. The rest of the cast are a bunch of misanthropes and deviants, though. The fact that it's about very base human nature taking over the country is definitely informed by him.

I'm glad to hear that, because there was so much music in Young Liars that I almost felt like if you didn't know the book, it would seem like I was just throwing that at you because of your background. 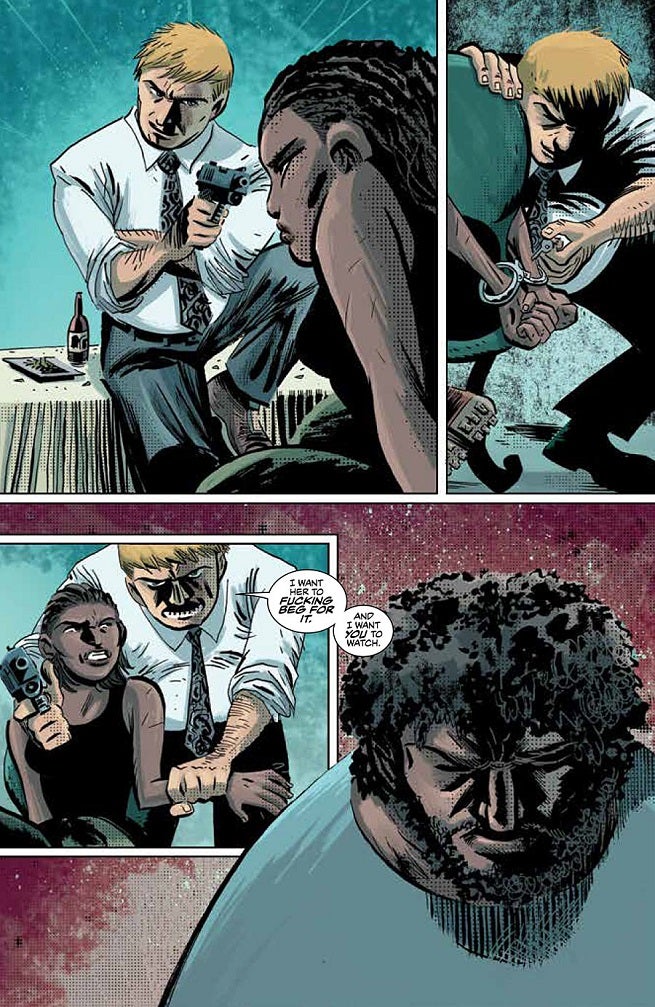 Oh, yeah. The whole thing is triggered by music. I know so much more about pop culture and sociology than I do actual politics, you'll notice that there's actually kind of a lack of politics [in the series]. I"ll never be as good as someone like Jonathan Hickman, who can effortlessly enter this world where you feel like he's the CNN of comics and it's completely accurate. A lot of it is based on social factors, popular culture, how we perceive politics and politicians and ourselves.

Is there a big takeaway from this experience that you had and you'd like to share with our readers?

I know that when I went into making comics, my goal was to be a professional comic writer, not someone who dabbles in it. Kind of relating to the first question, it means a lot to have done an ongoing-ish mature readers series like this. It's something that almost every comics writer I admire has done at one point or another and I feel like I'm definitely someone who's trying to emulate my heroes a lot; I will always do that even though I know it's not necessarily cool.

I feel like with all the other stuff I have planned and going on right now, having this kind of a book under my belt is important to me. If I was a reader of my comics or discovering me, no matter what work-for-hire work I do, or like my next series with BOOM! is super light-hearted, the fact that I can plumb the depths of morality and get really, really dark is an important thing to see. 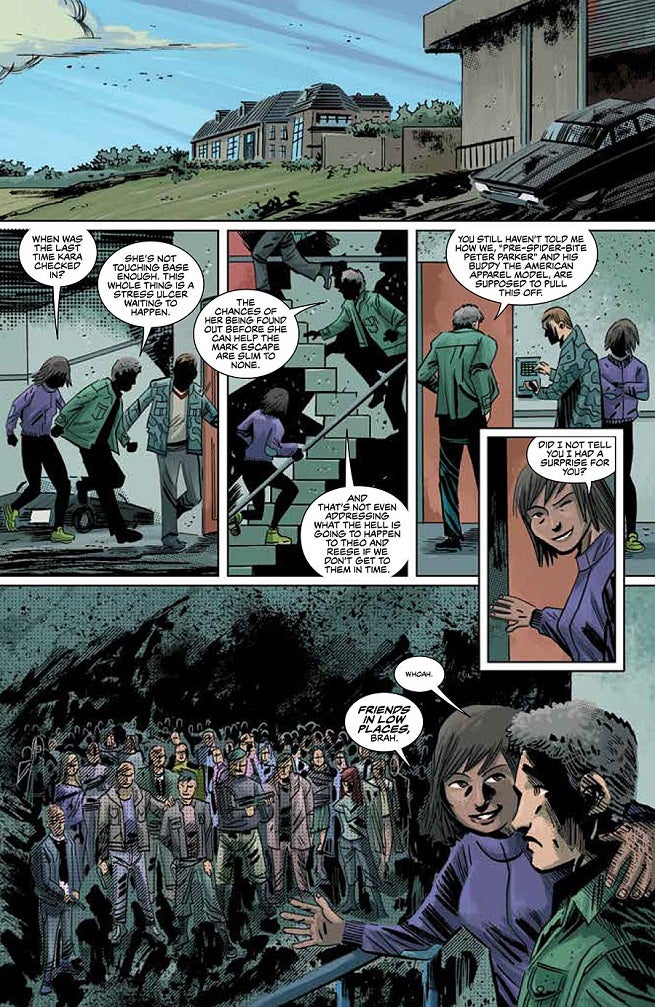 All my favorite writers have done work that does that. I'm actually working on some stuff that's even darker but I feel like the premise of this, whether it be Preacher or Scalped or DMZ, a lot of my favorite writers have done books that I could loosely compare to Evil Empire, and so I feel like that is a big notch on my own personal to-do list. I hope that as I continue to write comics, people will go back and discover ee even if they aren't reading it now.

Another thing I hope to do fairly soon is a ridiculously long ongoing series, and for good reason. Not only because so many people I admire have done that at one point but that's not really a reason to do it. I have a few ideas that feel like they could work that way, though. Every so often I'll just forget that something like Transmetropolitan exists, and then you just think that there's something where you can get like fifty issues of Warren Ellis and that's incredible.

Last thing. When I asked my co-workers whether they had any questions they were dying to ask, Jay Jayson kicked one in that was too silly not to ask: Since your band is called Say Anything, does that mean if you were to start a new one it would be We Bought A Zoo?

"We Bought A Zoo?" [Laughs] I'd lean more toward Vanilla Sky but I feel like that sounds like an '80s synth band, unfortunately. I think I'd avoid We Bought A Zoo. Almost Famous which is really bad -- not the movie, the movie is amazing, but it would be the worst name ever for a band -- and I think I'd still use it over We Bought A Zoo.