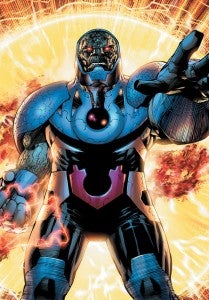 author Siike Donnelly at Bleeding Cool is reporting that DC has unveiled more detailed plans for their Free Comic Book Day offering and the near future of their line at MegaCon today. It should be noted that Donnelly is a stringer for the site whose style of reporting is very loose and unsourced; it's unclear whether the information he's passing along is the result of a panel or simply his own interactions on the floor. According to his account, it was announced at the convention that DC Comics: The New 52 Free Comic Book Day issue will be written by Geoff Johns with pencils by Jim Lee on the entirety of its main story, including the four-page gatefold by Lee that has already been teased by the publisher. Backup stories by Johns will feature art by Kenneth Rocafort and Gene Ha, and the entire book will revolve around Pandora, the mysterious woman who first appeared at the end of Flashpoint and continued through the rest of the DC #1 issues. Donnelly also said that Dan DiDio had said Darkseid would be playing a major role in the near future for the publisher, and that his appearance as the Justice League's first villain in the world of the New 52 was a calculated move to lend oomph to his next strike at earth. The publisher also reportedly told fans that they'll have to wait a while longer to see characters like Wally West and Donna Troy reintegrated into the DC Universe. According to the report, a fan who asked about West was told that his age was hard to calculate into the world of the New 52, where his uncle had been de-aged and his nephew was already a teenager. Still, recent references to Ted Kord and the New Gods in O.M.A.C. will be followed up on in the near future.