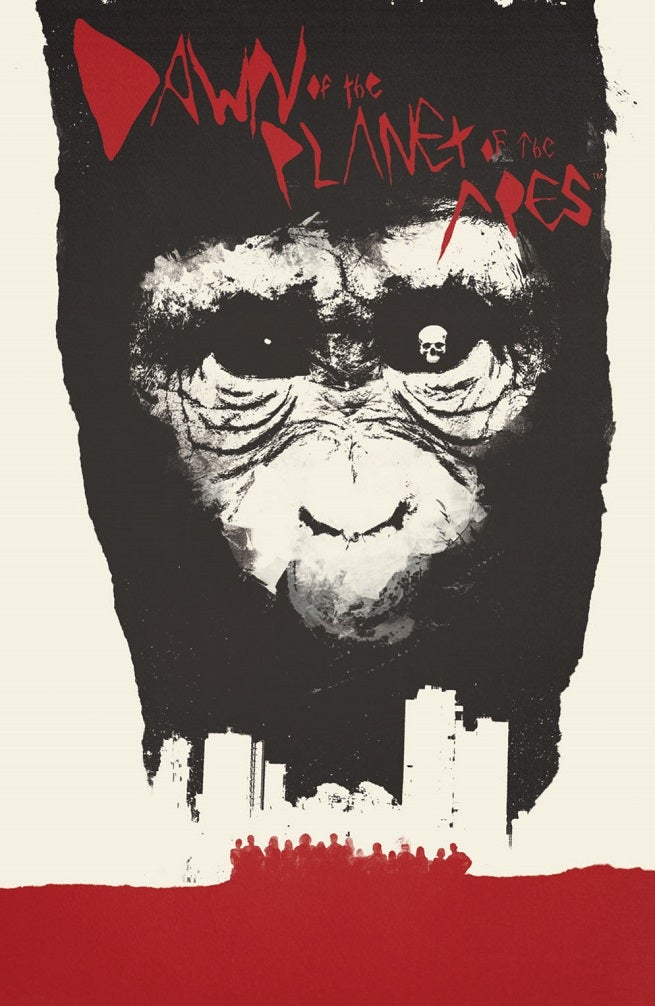 They're going with a similar formula to what's made their Big Trouble in Little China and other licensed books must-read material for fans of their respective franchises: Moreci is a fan first, somebody who's probably been casually kicking around Planet of the Apes ideas in the back of his head since before he was a professional writer.

As much or more than affection for the property, though, BOOM! has been bringing in writers who are confident enough to take these franchises forward, a problem with some licensed books that tend to stagnate while the creative team tries to take advantage of the status quo popularized in the original property.

Moreci joined us to talk about the project, how he came to work on it, why it's not a survival tale and how to strike that balance and keep the franchise moving...even when people already know where the story will eventually end up. 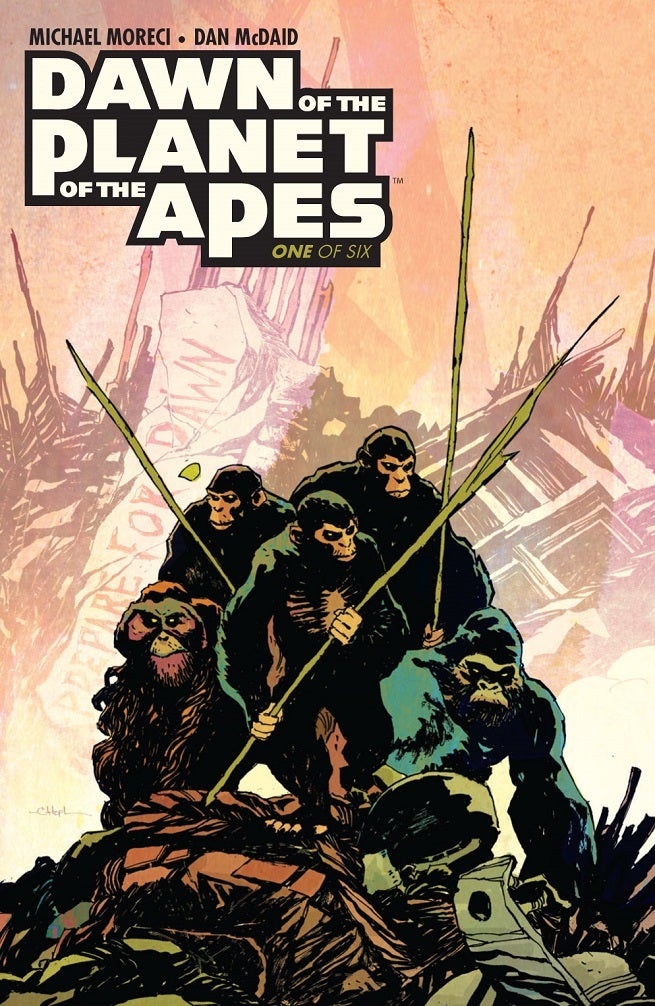 How did you come to this job?

Well, see, I have these Polaroids of a BOOM! senior staff member and..kidding, kidding!

I think it's the classic tale of right place at the right time. I had expressed how I was available to work on licensed properties, and I think Bryce Carlson knew what a huge Apes fan I am. So when this came available, and he knew I was looking, it worked out to be a fit. And, wow, it's a magical fit. I love, loooooove the Planet of the Apes franchise, so working on this series has been a dream come true.

How did you come to work with Dan McDaid on the book?

Easy, BOOM! editorial picked him! I actually had no part in this, but I couldn't be happier with Dan's inclusion in the book. His art is fantastic, and he's bringing something truly special to the Apes universe.

What's the canon here? Are there things that you had to work in or work around?

Our story takes place between Rise of the Planet of the Apes and Dawn of the Planet of the Apes. So there was a certain amount of "you can't show this, you can't say that" to keep in mind. Nothing too strenuous, though. The cool thing is that there's such a gap between Rise and Dawn — the end of Rise has Caesar and his fellow apes escaping into the wilderness; the beginning of Dawn has them settled into a civilization. So there are a lot of questions of how they got from there to here, and a lot of opportunity for cool stories to be told. We had a lot of freedom in this gap in time, and that removed a lot of potential obstacles of conflicting with the cinematic universe. 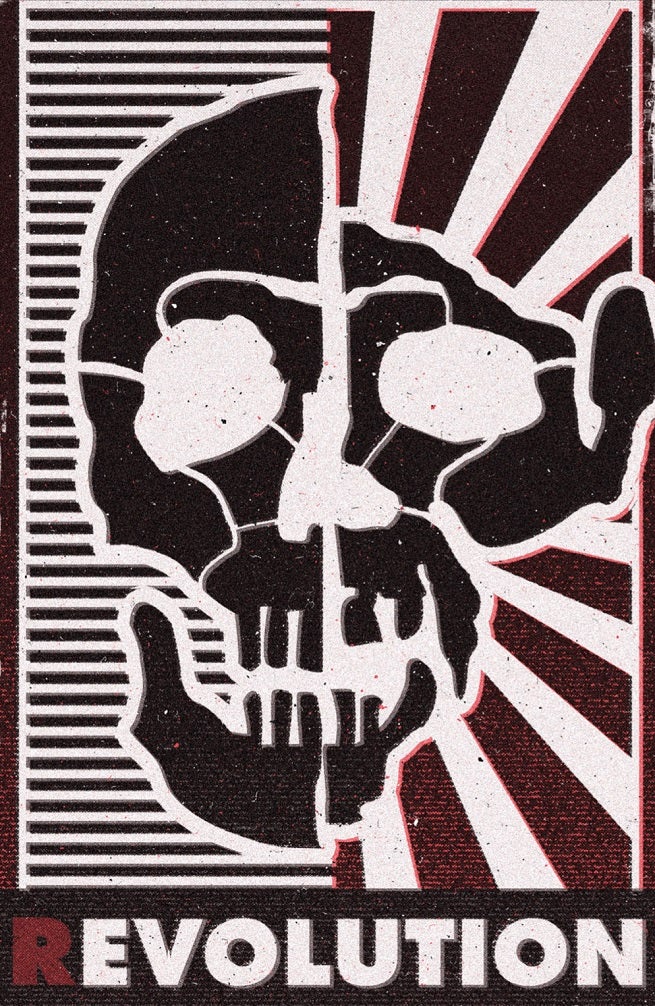 What makes this different from previous Planet of the Apes miniseries?

The main thing is this is the first series taking place in the new Planet of the Apes universe. Everything BOOM! has done prior — and those books are spectacular, believe me — has existed in the classic Apes universe. The cool think about this new universe is it really carries the spirit of the class Planet of the Apes films, those ideas that question society, order, equality, and the price to pay in maintaining peace. It's brilliant stuff, and the new Planet of the Apes films capture that in a voice that's totally unique and feels fresh. Our comic, I hope, achieves this same goal — taking the best of the classic Apes, and the new Apes, but making it our own at the same time. It's been fun trying to figure out how to make that work — thankfully, I have a great editorial team at my back.

Even though Planet of the Apes comics haven't always been massive commercial successes, obviously the property has had a huge impact on the industry in the form of Kamandi. Is that something that you look back on at all when you're working on a property like this? 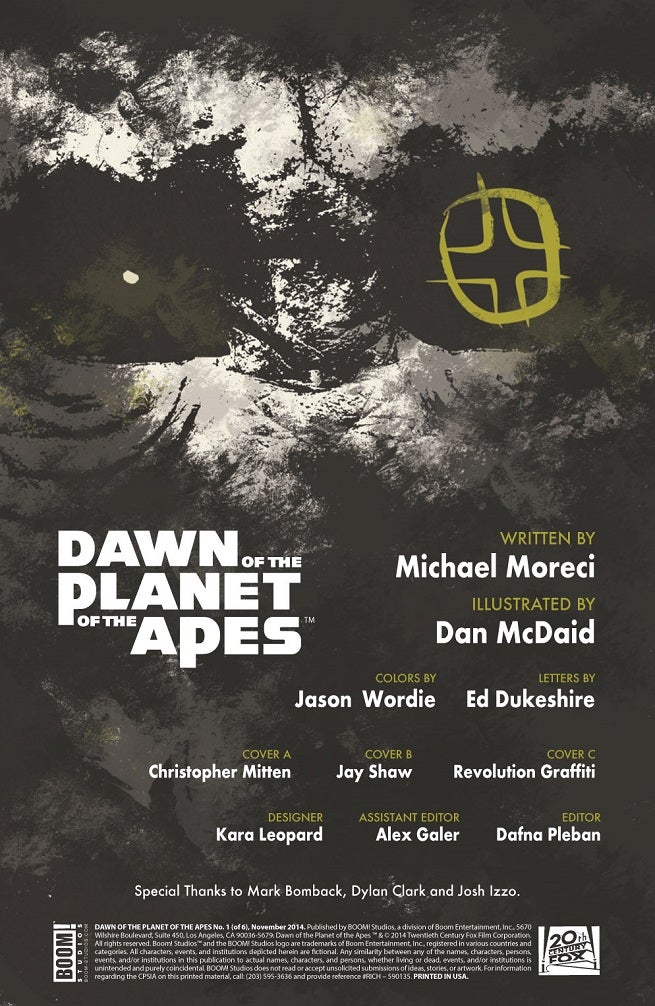 What are the odds of a POTA/Prime-8s crossover down the line?

It's already written in my mind!

Do you think it's harder to do a book like this when the property has been dormant for a while, or when it's experiencing a resurgence and there are more people watching?

We started working on this series before Dawn of the Planet of the Apes came out, and I was already nervous about working on a property I loved so much. And then the movie came out and blew up, artistically and commercially. I'd be lying if I said that didn't affect me, that the stakes weren't raised for this book after the game had started. When no one is watching, you have way more freedom — but when you're working on something that's current, it's much different. There's a lot invested in the Planet of the Apes franchise right now, a lot of people watching, so you can't go messing it up.

Obviously you'll have a lot more space to work with to flesh out this time period than did the films -- but six issues still isn't a lot to cover that long a period of time. How did you pace it out?

Well, it actually doesn't cover the entire period, which is nice. We're looking at a key moment that really brings the apes and humans a giant step closer to where they are at the beginning of Dawn. 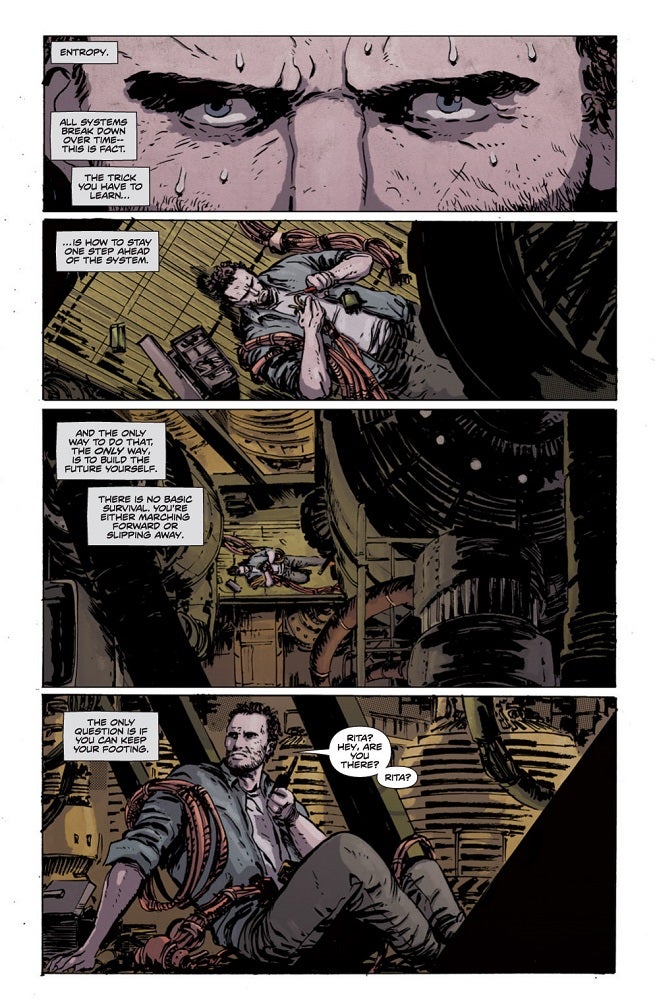 You've got point-of-view humans, obviously. How do you go about creating a relatable character who comes into the story in a place where survival horror has basically already started?

That's a great question — and the answer is you don't make it a survival story. That's something I specifically set out to do, because I don't think that's true to the franchise or Malcolm's character. What makes Apes so great, in part, is that it's all about forging ahead. Apes and humans are always trying to figure out society, for better or worse, and push it forward. There's not that sense of "we're just trying to stay alive" like you get in most post-apocalyptic stories. I think you can relate to Malcolm and his family because they're doing what we're all trying to do — make things better, find ways to improve, find ways to keep going. They want a more sustainable and safer world, only their road to achieving that is much more difficult than most.

What's the one big takeaway you want fans to have from this interview before reading the book?

My editor and I were just talking about this the other day, that one of the things we're really proud of is how true this feels to the universe. A lot of times, when dealing with licensed materials, you get into a trap of creating a story that is sort of just fan service — something cool for die-hard fans to enjoy. And don't get me wrong, there's nothing wrong with that. But this story we're telling, I think all of us working on the book agree, feels essential — there's real stakes, real development that enriches this Planet of the Apes universe. We didn't take this lightly — this series is intense, emotionally rich, and defies expectations in a lot of ways. I'm truly proud of the work the entire team has produced — Dan, Jason, Ed, Dafna, and Alex — and I think it will resonate with Planet of the Apes fans, new and old.

Michael Moreci Talks Dawn of the Planet of the Apes