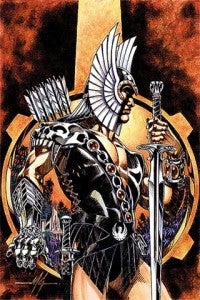 Last weekend, news broke that legendary Warlord and Green Arrow artist Mike Grell had cancelled a convention appearance because of a hospitalization, and with no other details available, fans started to worry.

Shortly after that, his wife took to the Internet to try and calm people down, followed by a formal statement from the artist himself explaining what had happened in his personal life since the beginning of August. Then, a few days later, another note to say that he was home and recovering.

Now, Grell has issued a somewhat longer statement about the timing and nature of his ailment, giving fans a sense of what was going on during the radio silence. You can read it below.

On Friday, August 16, I managed to tunnel outside the wire, slip past the fat guard and his stupid dog and hitch a ride on the back of Steve McQueen's motorcycle. It had been 16 days since I went to the hospital with what turned out to be nothing more exotic than a case of cellulitis, which came with a fairly unique set of collateral symptoms, including a 48 hour period during which my right eye wouldn't track (at its worst it was about 45 degrees off). After a battery of tests including CT scans, MRI's, untrasounds, X-Rays and a spinal tap (NOWHERE NEAR AS MUCH FUN AS THE MOVIE!) had ruled out all the nastiest possibilities like MERSA, necrotizing fasciitis, meningitis, stroke, tumor, anaeurism and brown recluse spider bite ( it was a bug bite that likely started everything off, followed my me scratching), it came down to attacking this thing with massive doses of IV antibiotics.

As I wrote in an earlier post, the cure comes with its own set of side effects - the dying bacteria gives off toxins that cause further infections and before long my right calf looked like something out of a horror film with a really low makeup budget.

I spent the first 11 days at Summit Pacific Medical Center before being transferred to Providence St. Peter Hospital in Olympia. By then, my right leg had ballooned to about double its normal size and was the shade of a boiled lobster. Within a couple of days things were under control, swelling and redness greatly reduced and I began physical therapy - basically laps around the hallways and up and down stairs - which greatly increased my flexibility and mobility and helped speed the rest of the healing process.

Since returning home, I'm able to move around much better and have been catching up on much needed sleep. My leg still looks and feels like roadrash and I'm looking at another week of mostly bed rest, but everyday is an improvement and I'm looking forward to getting back to work.

On the plus side, I'm 24 pounds lighter than when I checked into the hospital on August 1st... but I can't really recommend it as a weight-loss program.