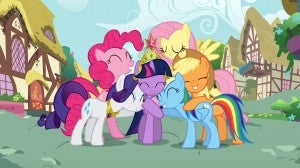 Daniel Ingram is probably not a name that most of our readers are immediately familiar with, even if his work is likely to have been stuck in your head at some point in the last ten or so years. He's a musician--a specific breed, in fact, writing music for TV and film, most notably the cult sensation My Little Pony: Friendship is Magic. When, recently, Ingram was called upon to write some very special music for the series' highly-touted "coronation episode," ComicBook.com caught up with the Emmy-winning composer to find out what it's like to work not just on kids' shows, where there are some very specific demands placed on his talents--but on a show like My Little Pony, where you know there's an element of the audience who's watching from a decidedly different perspective than most. The series airs on Saturday mornings at 10:30 a.m. EST on The Hub. You can check out some of Ingram's work in the video below, and then check out our interview below that. 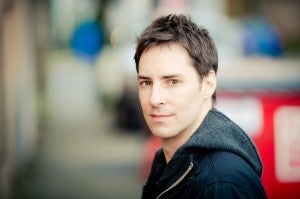 As the composer, how do you work on developing a theme for an existing property like My Little Pony or The Littlest Pet Shop where there are established theme songs from earlier versions of the series or ads or whatever it is? That's a good question. I believe more information is always best, so I'll definitely do research into earlier versions. In the case of My Little Pony, in the previous generations of the show, the music was a little bit dated and so I knew right away, "Okay, well this is a very fresh iteration of the series. We're going to break with tradition and do something totally new." So that was fairly easy, and I write the songs on that show--so approaching the songs was a challenge. How do you take the song tradition from before and keep that existing tradition but maybe now make it a little more sophisticated, and something that would appeal to parents watching as much as the kids. I think that for every show, it's important to come up with an original sound and a distinctive sound so that you can really build the brand, the identification with that show. Something like Pound Puppies--really the original show, there had been many years that it hadn't been done so again you start fresh. The director had a very clear idea of what he wanted it to sound like. And The Littlest Pet Shop, I don't think there ever was a Littlest Pet Shop before now. You had those webisodes, but they were pretty basic from a music level so there was an existing theme song and I was able to lift the theme song. We knew we wanted to keep the melody and still do a fresh take on it. But generally it's like you're always searching for a new sound that's going to be distinctive. Each one of these songs sounds totally different from the rest but at the same time is aware of the history. 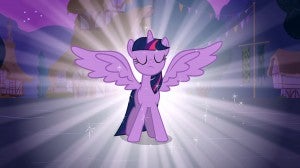 Is that difficult to do? I always get visions of the episode of Two and a Half Men where he just went, "Man, I'm dry. I don't know how to do this anymore." Yeah--I get writers' block just like any artist. I try not to get too caught up in worrying about, "Is this going to be different?" and I think the challenge for me is just to always be as creative as possible. Fortunately, shows like Littlest Pet Shop are so distinctly different from shows like My Little Pony in terms of the songs I'm writing that it's coming from a totally different place in my brain so I can keep them separate. That's definitely a challenge and it's something that I'm aware of and there have been times that I've written a version of a song and we'll do it and go, "You know--this might sound like this other song that I've already done," and I'll have to go back to the drawing board and really challenge myself to try something new. It's a big part of the challenge of the job--staying fresh. 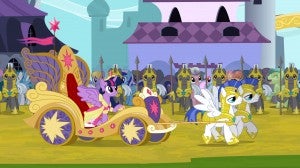 There's got to be a pretty specialized breed of guys who write specifically for kids--I mean, even the songs where the lyrics are just atrocious, you can get them stuck in your head forever. You know, they always talk about that with songs for kids' shows. Catchiness is really important and something that's simple enough that it's instantly identifiable but sophisticated enough that it's not roll-your-eyes terrible, because it's so pandering or something. That's a fine line to walk. I love melody; I'm a huge fan of melody and I think the core of songwriting is melody against chord progression. I think that because I love the craft of writing melody so much that hopefully the songs I write are catchy and people can identify with them but at the same time hopefully not drive you crazy. I know how annoying that can be--I've always got something stuck in my head and it's a perpetual condition; there should be a medical name for it. There's a very undefinable quality in what makes something catchy and yet not annoyingly catchy. For me, the typical example of a song that I just hate getting stuck in my head is something like "It's a Small World After All," where it's catchy, but catchy doesn't necessarily mean it's good. Catchy can be a terribly insidious thing. So it's that challenge of making something that's catchy but that you actually don't mind having stuck in your head. 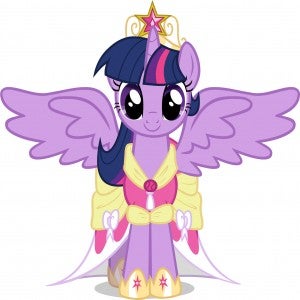 And is it challenging to write for a larger audience, too? I mean, My Little Pony... I'm always aware of going, okay, this is a children's show, but I don't want to just write music that you just immediately hear and you go "Oh, yeah...". And occasionally you have to because the song might be a bit of a spoof or it might be particularly cute and silly just because of the nature of the context in the script but for the  most part you want to actually write something that can stand on its own outside of the show and be a legitimate song. If you can do that in the context of a children's show, that's quite an achievement. How hard is it when you have to write a song that is a little more downbeat or darker--the bad guy song or the bad part of the story song, and try to fit that into the motif of the show as it exists? That's a fine line to walk--the villain song or the emotional thing. In season two, the aria was my first time that I set out to write a more emotional piece or a darker piece and ironically that's the most successful song on YouTube right now. It has over 10 million hits and people really identify with it. So I think there's room in children's programming for emotional music and darker music and you don't hear it very often, but I think people love it when it's good. And there's very different things you have to appeal to--especially when you consider the Bronies, and the parents of the kids watching. That's a very broad age range you have to write for. Yeah--but you know, it's interesting. I don't really consider that demographic very much. When I'm writing, the first thing I'm tryign to do is write a song that I personally would enjoy or I would have enjoyed when I was young. If you get too caught up in whether the parents are going to like it or the fans in their '20s and '30s or are the kids going to like this--it's just too many minds to try to read. If you're just really true to your own personal artistic vision and you stick with it and set your own standards then it's a lot less intimidating and you actually get the work done. That's where I approach it: Do I like this song? Am I able to turn this song on and just listen to it 100 times throughout the day just because I enjoy it? At the end of the day, I just hope it appeals to all of these other people but really I'm kind of writing for myself first and hoping that does the job for everyone else. How did you get into writing music for television? It seems like such a specialized field that I have a hard time imagining how one wanders into it. When I was in college, I was like, "I'm never going to write for movies and for television," because I was afraid that the demands of writing such a broad variety of music was too much--that I was going to stick to my own style of composition which I felt at the time was fairly specific and fairly limited. It was just an odd trajectory where I met a composer who needed an apprentice and he was working in television. I was just helping him out and watching what he was doing, and I started to try my hand at it and realized that actually the opportunity was there to do new things and to have a new voice and to try a huge range of styles in a way that's actually kind of fun and not as intimidating as I thought it would be. So I never set out to do it; it was never a goal to pander my music to television, it just happened very naturally. I got lucky and it found me.