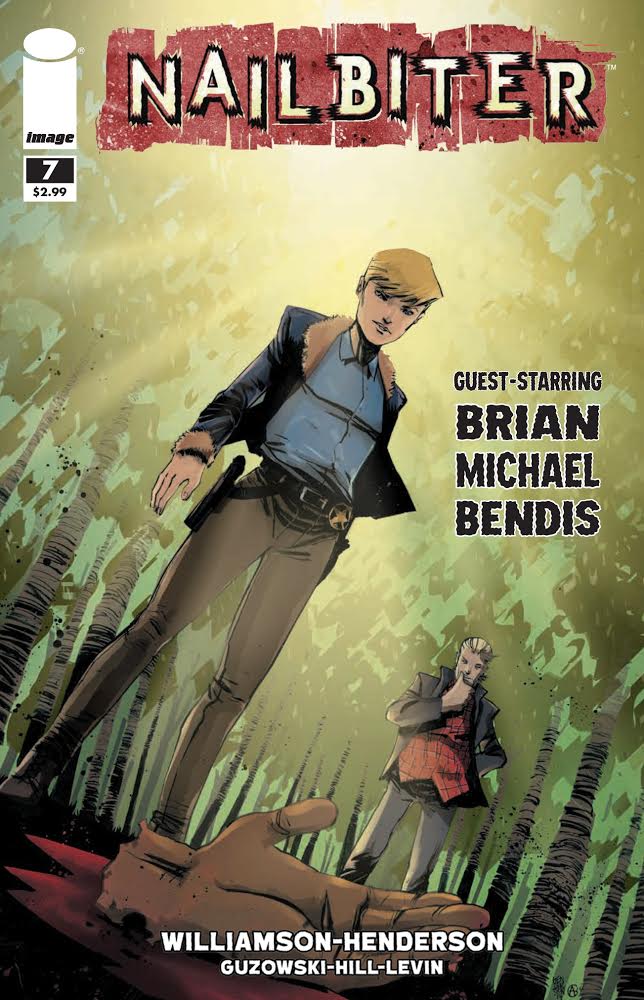 Guest stars are a common occurrence within the world of superhero comics. Although less common, there are plenty of examples of other intellectual properties crossing over and sharing space. In comics characters jump between the pages of various books with ease, even crossing between companies on occasion. Creators are a different matter entirely. It's not every day that you see a writer or artist pop up on the cover of a title with which they are not typically associated. So it's a bit of a surprise to see Brian Michael Bendis (Goldfish, Alias) in the pages of Nailbiter #7.

It's an interesting choice on Joshua Williamson and Mike Henderson's behalf to center an issue of their series around a comics personality like Bendis. Unlike the many subtle references to creators and critics found in Nick Pitarra's work in The Manhattan Projects, this issue hinges on the audience understanding who Bendis is. He is a big enough figure within the comics community for the gag to be effective as the centerpiece of the story, and it is most certainly played as a gag.

Bendis is visiting the town of Buckaroo in order to research an idea for a comic book. Unable to obtain a ride along with the sheriff, he opts to play the tourist and interview people throughout the town and explore some of the sites. He accidentally stumbles across several telling moments that provide exposition for the series, while encountering plenty of skepticism about comics. The jokes about the medium, largely focused on the public's perception, are very pleased with themselves. They are moments written by someone in comics about someone in comics for someone who is already reading comics. There's a self-congratulatory air to it that ignores the more interesting facets of including a comic book writer in this story.

The highlight of Bendis' trip to Buckaroo comes in the form of a 36 panel spread. Henderson provides dozens of responses to the same question: Do you have a connection with any of the Buckaroo butchers? Each panel represents a unique person and response. Facial expressions and words play equal parts in creating a fully formed personality for the hoi polloi of Buckaroo. Every person offers something different and the responses range from the humorous to the threatening. It's a great display of the diversity and potential this concept still holds, combining elements of danger and fun.

Henderson maintains the creepy mood that I've come to relish in Nailbiter, but the script falters while relying upon Bendis' inclusion. Removed from the context of a comic book store, it fails to be funny or interesting. It's too much of an inside joke to appeal to outside readers and is too reverent of Bendis to do something truly intriguing. There's never any sense that Bendis is in danger. He moves through the pages like a famous guest star on a 1970's sitcom. His presence doesn't work to comment on the text itself or the connection between fiction and true crime. There are some attempts made at this, but they read well only on a superficial level. At no point does it feel like Williamson is fully prepared to embrace the strangeness of this concept and help it live up to its potential.

Nailbiter #7 isn't disappointing because of serious failures on Williamson or Henderson's behalf, but because it fails to live up to the potential of what they have created. At its best this series can be something uniquely strange, combining disparate elements to form something compelling and new. The concept of transforming a comics creator into a cast member falls in line with that promise, but it falters in the execution.

Nailbiter #7 Fails to Deliver on a Fascinating Conceit (Review)