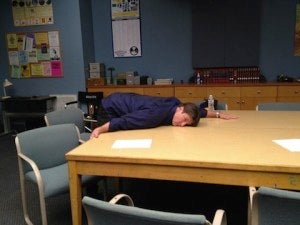 He might not get to be Ant-Man, but Castle and Firefly star Nathan Fillion will have the chance to be a Human Being.

That's right--Mal Reynolds himself is headed to Greendale to guest star on an episode of Community where he'll be stealing Neil Flynn's schtick as a streetwise head of the janitors who will butt heads with the Greendale Seven and their new teacher, played by Jonathan Banks of Breaking Bad fame.

"When Annie (Alison Brie) and Professor Hickey (guest star Jonathan Banks) team up to navigate Greendale’s corridors of power, they must contend with Bob Waite (Fillion), the politically savvy head custodian who’s not afraid to get his hands dirty but is smart enough to wear rubber gloves," reports Deadline.

Nathan Fillion to Guest Star on Community This Season