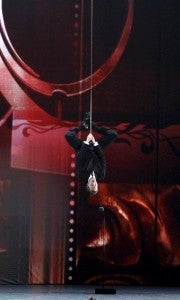 After peppering Spider-Man: Turn Off the Dark last year with a string of jokes at last year's Tony Awards, it might have seemed as though host Neil Patrick Harris would steer clear of the troubled Broadway show this year--but if comics teach us anything, it's that when something works you just keep hammering away at it for as long as you can. Ace Showbiz reports that, while swinging down from the ceiling on a Spidey-inspired web, Harris joked, "Any concerns I had about this 'Spider-Man' rig failing have been overshadowed by the searing pain in my junk." Spider-Man: Turn off the Dark, of course, has suffered a number of technical setbacks and actor injuries since its launch, which at one point shut down the show completely to make changes. As one of the biggest stories in show business, it has managed to dominate conversation about Broadway the last couple of years. Besides Harris' memorable Tony Awards jokes, the play--featuring music written by Bono and The Edge from U2--the show was featured in a series of sketches on Conan, Conan O'Brien's late night TBS talk show.

Neil Patrick Harris Does Whatever a Spider Can