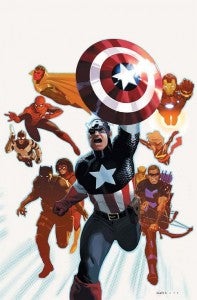 The new line-up for the Avengers has been revealed. It's been known for awhile that there would be a new Avengers line-up after the events of Fear Itself, but the exact make-up of the team was being kept secret. In a recent Marvel's Next Big Thing conference call, Avengers writer Brian Michael Bendis mentioned that some heroes would not be available for the Avengers after Fear Itself. We speculated that this could be a hint that Thor was being killed off.

In addition to revealing the new Avengers line-up, the cover also reveals a new look for Hawkeye. His costume appears to have been re-done to make it closer to the look Hawkeye will have in the upcoming Avengers movie. It's interesting that Marvel changed Hawkeye's look to be more like the movie look, but the new Avengers line-up is far different than the Avengers movie line-up. Iron Man, Captain America, and Hawkeye are both in the new line-up and the movie, but Thor, Black Widow, and Hulk weren't included in the new line-up.