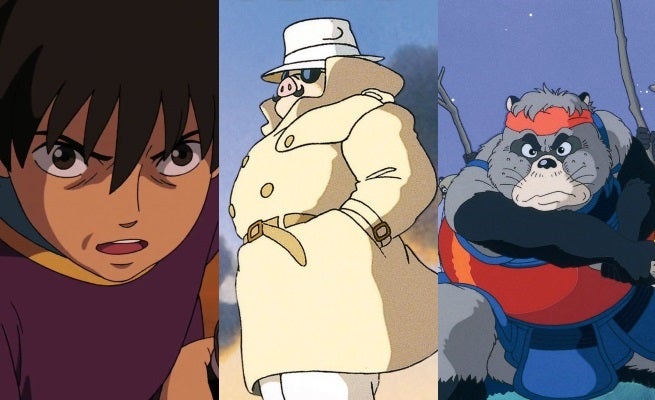 Studio Ghibli is well known to fans as the renowned Japanese animation studio that rivals any other, worldwide, as the best in the world. For decades the studio has produced one masterful animated film after another, from the environmentalist fantasy adventure Princess Mononoke, to the chilling anti-war story Grave of the Fireflies, and the historical biopic The Wind Rises.

As the western distributor of Studio Ghibli films, Disney has been steadily releasing them on Blu-ray. So far, they’ve hit many of the best known works, including Princess Mononoke, Howl’s Moving Castle, and My Neighbor Totoro. Their latest batch includes some of their lesser known work: Porco Rosso, Pom Poko, and Tales of Earthsea. 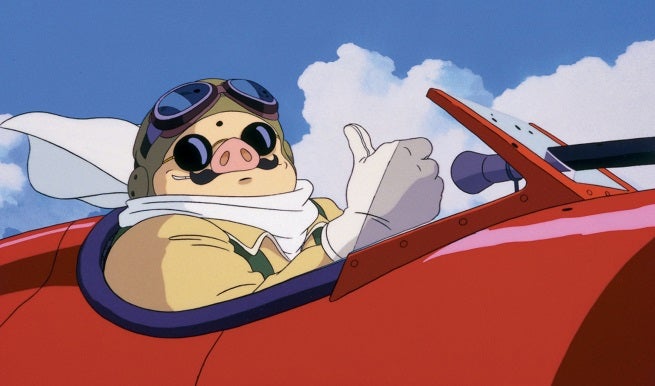 Porco Rosso is a criminally underappreciated masterpiece. Directed by the master of animation, Hayao Miyazaki, the film has never received the same notoriety in the West as some of Miyazaki’s other films, likely because it was released in 1982, 15 years before Princess Mononoke made Studio Ghibli’s name in the United States.

Set in the Adriatic Sea islands following World War I, the film follow a world weary Italian fighter pilot who was cursed to look like a pig. Porco (voiced by Michael Keaton in the English dubbing) lives as a bounty hunter as he struggles with survivor’s guilt, and is forced to watch the country he fought for during the wall fall to fascism through politics. It all comes together in a story that feels like The Sun Also Rises, but with cartoon pigs, and just a touch of Casablanca.

The film is full of dogfighting, unrequited romance, humor and adventure, with a lively, period appropriate score that keeps things feeling brisk, and the symbolism of Porco’s transformation into a pig is never feels belabored. It’s one of the best films that Studio Ghibli has ever released, and hopefully it will a whole new audience with its Blu-ray release. 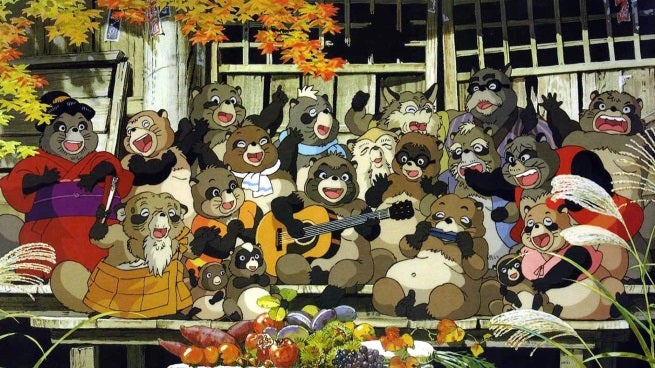 Pom Poko is directed by Isao Takahata, who co-founded Ghibli along with Miyazaki. Takahata, who also directed Grave of the Fireflies, has never reached the same level of popularity in the West as Miyazaki. This is likely because, prior to the release of Ghibli’s most recent film The Tale of Princess Kaguya, Takahata hadn’t helmed a feature film since 1999. Nonetheless, Takahata is every bit as much a master of the form as Miyazaki.

The film is about a society of tanuki (raccoon dogs of Japanese folklore) who are struggling to survive as their forest steadily shrinks to make room for a human housing development. The tanuki are capable of shapeshifting, and use the ability to wage a kind of guerilla warfare on the housing development.

The film is certainly more upbeat than the brilliant but depressing Grave of the Fireflies, but still paints all characters involved with a moral grey. The film itself is energetic, willing to cut out of the real time narrative to display an evocative image – the builder’s destruction represented by bulldozers consuming a leaf, as if insects eating away at plant life –but the tanuki themselves are depicted as being disorganized and lazy at best, and completely unsympathetic to the human lives lost by the destructive pranks. It’s an acute examination of urban expansion, but also a critique of how we react to it.

The film, unfortunately, does not translate perfect in its English dubbing. The tanuki are referred to as raccoons, which isn’t quite correct, and their prominent testicles, used frequently as a prop for shapeshifting, are referred to as pouches instead, but these changes are relatively minor. Takahata’s incredible vision still comes true, making Pom Poko a movie that any animation fan should seek out. 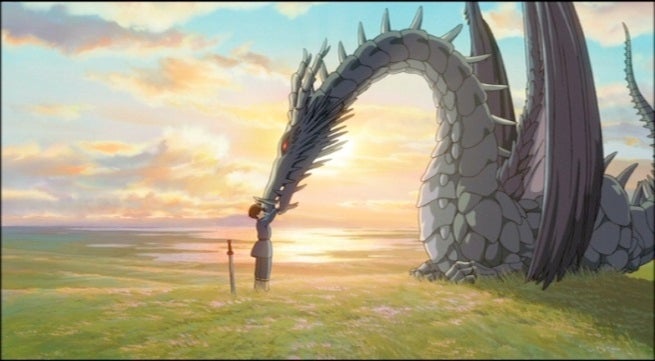 Tales from Earthsea, unfortunately, can’t match the pedigree of either Miyazaki or Takahata’s work. Widely regarded as the Ghibli’s weakest film, Tales from Earthsea was directed by Hayao Miyazaki’s son, Goro Miyazaki, and is a loose adaptation of the classic fantasy novel series by Ursula K. Leguin.

Tales from Earthsea was Goro’s first film, and it shows. The film feels crafted by nervous hands, with awkward pacing and characters that feel like they should be interesting, but somehow come off as flat. It lacks that clarity of vision, especially compared to other Studio Ghibli films.

And that’s really the rub. Would Tales of Earthsea feel so disappointing if it wasn’t constantly compared to the rest of the Ghibli library? Despite the narrative problems, the film is still visually stunning, bringing the world of Earthsea to life with skilled craftsman ship that few outside of Studio Ghibli are capable of. There’s also the bonus of having Willem Dafoe chew the animated scenery as the films antagonist, Yuko Tanaka, in the English dubbing.

It may still be the weakest film in Ghibli’s canon, but that still makes it the worst film by the best animation studio in the world. It may only be truly essential for completists and die hards, but it’s still an interesting film if only to see how much Hayao Miyazaki and Takahata bring to the films via their absence from Tales of Earthsea.

Porco Rosso, Pom Poko and Tales from Earthsea are all available now on Blu-ray.