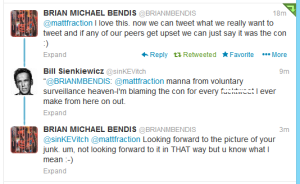 When fans registered their new, higher-tech New York Comic Con attendee badges this year, one of the choices offered was to sync your badge with your social media accounts.

This is pretty standard operating procedure on a lot of websites now; it greases the rails when you want to comment on a blog or tweet at/about something. Most fans just hit "accept" on those little terms and conditions windows that pop up without thinking about it too much.

In the case of New York Comic Con, though, one of the things that they've done with that blanket consent is to tweet on behalf of convention-goers, hashtagging #NYCC and basically just using promotional-speak...but making it look like it's coming out of the fans' mouths.

"#NYCC is the Best Four Days of my Year!" Is one of the common ones, according to both an article at Mashable and a ComicBook.com reader who had it tweeted from his account. Upon discovering that had been tweeted on his behalf, our reader joked, "Why don't you make me look even sadder, NYCC?!?!"

Predictably, some of the more creative types in the comics community have jumped at the opportunity to have a little fun with the circumstance.

"We all should tweet as if hacked I <3 NYCC and send pics of our own a--holes," tweeted Hawkeye artist David Aja. "I have been waiting this moment for years!"

Bendis:I love this. now we can tweet what we really want to tweet and if any of our peers get upset we can just say it was the con.

Sienkiewicz:manna from voluntary surveillance heaven-I'm blaming the con for every f--ktweet I ever make from here on out.

The convention hasn't had an official response yet, although the Mashable article that seems to have revealed the auto-tweets is quickly going viral throughout the comics industry, so don't expect these jokes--or the sense of frustration behind them--to stop tonight.