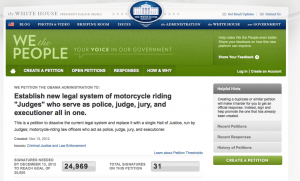 By now, most of our readers have probably heard of the dozens of disgruntled "red state" voters who have petitioned the White House for secession since President Barack Obama won re-election. It's probably not surprising to learn that the White House has more pressing matters at hand. For example: a San Francisco man is petitioning the Obama Administration to abolish the current American legal system and create one based on the Judges appearing in Judge Dredd comics and films. "Well, we all knew it would come to this," tweeted crime novelist Duane Swierczynski, who will write the forthcoming American Judge Dredd comic for IDW Publishing. The character has experienced a resurgence of popularity in the United States concurrent with the release earlier this year of Dredd 3D, a financial disappointment but critical success that impressed most fans. "I know this is an abuse of the petition process, but it is just so awesome," Image Comics's Branwyn Bigglestone tweeted last night, and tagged Dredd's U.K. publisher 2000 AD in the post. Says the petition, which you can see here:

WE PETITION THE OBAMA ADMINISTRATION TO: Establish new legal system of motorcycle riding "Judges" who serve as police, judge, jury, and executioner all in one. This is a petition to dissolve the current legal system and replace it with a single Hall of Justice, run by Judges; motorcycle-riding law officers who act as police, judge, jury, and executioner.

Created yesterday, as of this writing the petition has 53 signatures on it, out of 25,000 they hope to obtain before it's presented to the Obama Administration.

The Boys Jokes Season 3 Is an Eight-Hour Silent Film