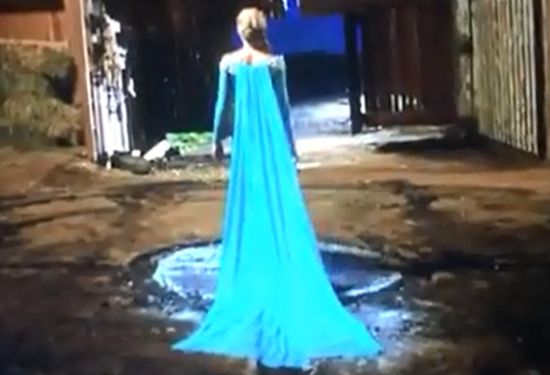 has been a monster-sized hit for Disney, racking up $1.19 billion at the worldwide box office. Back in April, Once Upon A Time showrunners had teased the possibility of a crossover with Frozen, but no one had really expected it to happen this season. However, during the Once Upon A Time Season 3 Finale on Sunday night, Elsa from Frozen made a surprise appearance. Near the very end of the episode, a blue fluid spills out of an urn and starts to fill a symbol carved in stone in a barn's floor. After the symbol is filled, the blue fluid forms into a woman's shape. The woman has blonde hair and is wearing a blue gown and blue gloves. She removes one of the gloves and fires an ice blast. Then, the woman walks away leaving a trail of ice behind her, as she exits through the barn doors. While the woman's face was not shown during the episode, it was very clear from what was shown that it was Elsa from Frozen.

Once Upon A Time Season Finale: Did Elsa From Frozen Appear?