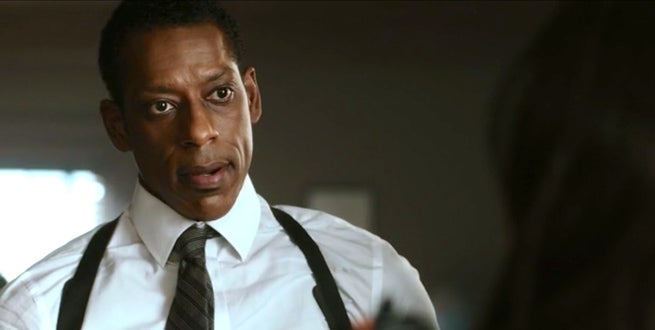 Roberto Orci, seasoned genre writer and producer with TV shows like Alias, Fringe, and Sleepy Hollow in his résumé, is teaming with actor Orlando Jones (most recently of Sleepy Hollow himself) for a new series called High School 51, but its plot isn't the only twist - these two veterans of the screen are taking their new series to a different place - online. The series, announced as part of the Machinima Heroes Rise digital upfronts in New York Monday afternoon, features a single human student named Alex Valencia joining a high school at Area 51, as the only human student.

In the series, Dream Lake High School takes in their newest, and first human, student after Area 51 is revealed to the public in August 2015. His parents are working at the no-longer-secret facility while he tries to fit in and, as they tease, "save the human race!"

After the reveal, we spoke with Orlando Jones about the series, his role in it, and why a Digital-only TV show was his next move after co-starring on a hit broadcast series. Oh, and since this is ComicBook.com and he's a comic book fan and actor, we asked that obligatory question, too.

Orlando, how did you go from a hit network TV series to this - why was a digital-only series the next step for you?

Orlando Jones: Well, I look at it like this. I don't know anybody whose primary watching device is their television. Your primary device for watching content is your phone, then maybe your tablet, and your computer, and then your TV.

OJ: Right, exactly! So as great a time I had on Sleepy Hollow most recently, and I've done a far amount of TV – I think I might be in the dubious position of having launched a sketch comedy show on the same network that I then came back and launched a drama. (laughs) So it's not as if I feel like there's ground I haven't covered in that arena.

But in this arena, I've been a comic book nerd for as long as I can remember. When I got the chance to be on MAD TV and MAD Magazine was my favorite magazine, you know, I'm not saying I pissed myself, but a little bit of pee came out. (laughs) Just a little bit, a couple of drops! (laughs)

So for me, it's weird, because it just makes sense to me. I don't understand why in the traditional business I seem crazy. In my mind, when I look at the fan experience I've had through things like MAD TV and Sleepy Hollow, it makes perfect sense to me to be even closer in this world through Machinima. It's where I belong, where I have the most fun, and we're making content that they get to comment on directly instead of being told what to think or feel about it. Once you make it and put it out there, it's not about us anymore, now there's somebody else in that story, the fan.

So I'm excited about what I think the future is, and I truly think, this is the number one portal for young men on the internet, and I'm a young man, so why not start it there?

The reveal trailer shown today just focused on the main character, Alex Valencia, what can you tell us about your character and the role you're playing here?

OJ: Not much (laughs). I think, the thing about High School 51 is, you don't know where anybody stands. You really aren't clear. That's kinda how high school is, in truth. It's a tumultuous time because of the personalities and the snakes and all of the madness that happens. So expect to be surprised by what happens and how it happens.

I think it's in keeping with the work you've seen Bob Orci do in the past, that it's layered and cool and edgy. But I'd go so far as to say nobody is trustworthy in this world.

And that includes your character?

OJ: Absolutely! Not at all trustworthy. (laughs) Not even close!

It sounds like there'll be a little more mystery and drama than people might think at first glance. The idea might sound a little goofy, right? "Area 51 opens up and has a high school for aliens…"

OJ: Yeah, exactly. That's kind of the least interesting part to us in many ways. The most interesting part is that you have to figure, if it's been down there for awhile, that means people feel various ways about it. You can't get people to agree on anything in this world. There will always be factions, those factions will always be warring, there will always be opinions about what people should and shouldn't know. So in our world, things have been shared, things have been used to create new things in the power structure, and problems are arising.

You're a big comic book fan, let's say you get the chance to play any character – Marvel, DC, Valiant are all making movies now… What's your number one pick?

OJ: Right now I gotta go Black Lightning. He's an interesting character that I think hasn't been explored a lot. He's a DC character, which I love, and I think there's so much potential for that.

And actually, the creator, Tony Isabella, sent me a message on twitter and said he wants me to play that role!

Happy birthday @TheOrlandoJones and know the creator of Black Lightning (namely, me) thinks you would be great playing the character.