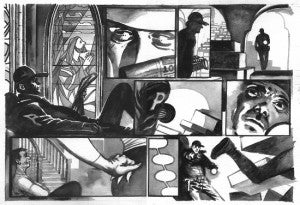 David Lloyd is a veteran comics creator with decades of experience on a number of exciting projects, but for years he's been introduced first and foremost as the artist on Alan Moore's groundbreaking V For Vendetta. That reputation only grew after the film version of the comic was made, which took the iconic Guy Fawkes mask Lloyd had designed for the story's central character and turned it into a countercultural icon embraced by self-described radicals on both sides of the political divide.

In the last couple of years, it's become most obviously associated with Anonymous, a hacktivist collective loosely associated with the Occupy Wall Street movement in New York and around the world. Lloyd has worked with Occupy Comics himself (including a beautiful and eloquent speech at San Diego Comic Con in favor of the project), but his newest project is revolutionizing form more than content as he and a who's who of comics notables work together on Aces Weekly, a digital-only comics anthology that's trying to put the revenue from digital comics directly (or at least more directly than most distribution channels) into the hands of the writers and artists who create the work.

The comics, which are done in landscape to be more conducive to a computer or smartphone screen (as opposed to the orientation of a traditional comic, which many digital comics and webcomics still embrace, are provided via a password-protected website to subscribers, who get a weekly e-mail when the book goes live.

Lloyd joined ComicBook.com at the New York Comic Con last month to talk about Aces Weekly and his career.

Well, to start, why don't you explain Aces Weekly in your own words?

Aces Weekly is a weekly, anthology comic book magazine but it's not on paper--it's on screen. It's exclusively digital; it's not preview for print, so don't be waiting around for any of the stories to come out in six months' time. You subscribe to it, that's how you get it, and exclusivity is part of the deal. We have some of the best people in the business working on it and it's very much a collective. Everybody is doing it for no money upfront because they believe in the model. This cuts out all of the people that take the money away in the print situation.

This goes straight from the print to file--we don't go through wholesale, retail, distribution, printing, any of that stuff--and it looks great onscreen. You don't get any printing problems, it looks terrific, it's delivered at the touch of a button, you don't have to go out and find a comic store, you don't have to order it--you just subscribe. Every weekly issue has six stories--they're continuing stories, like serials, so it's about seventy pages. Seven weekly issues adds up to a volume; a volume, up to about 210 pages, and then we start a new volume with new stories, although some of the stories continue. Mostly it's 21-page stories--episodic, the cliffhanger concept, week-by-week, like TV. You hang on to see what happens next week. We want to get that back.

There are some great people involved--Herb Trimpe, Steve Bissette, Bill Sienkiewicz, Colleen Doran. Billy Tucci is doing something for it. It's a great mix, great stories. I'm in it, the first one; it's the first story I really care about that I've done in 21 pages, called Valley of Shadows. It's set in a future California where the sun doesn't shine anymore, which is horrible. It's everybody's worst nightmare. It's a metaphor for all those bright things which suddenly become dull.

Initially, the idea was to use somebody else's platform; there are various platforms you can use, of course. But my colleague and collaborator is an ex-Marvel editor in the U.K. and he said it would be better if we had our own, and he's right.  It's more work to have your own identity but at the end of the day you are specialists.

Have you had any pushback from readers? I mean, everyone loves their paper copies...!

No, everybody's pretty positive.  From an economic point of view, we really cannot afford to do [print editions]. We have a limit of two years after publication.

If people do want to go to print, it's two years. We want to give that freedom to everyone, because they're giving us their time for nothing, but that's the key--if people can hang around for six months and get a print edition, they won't subscribe. And the whole point of this is for people to subscribe because that way, we split the money equally. Once the operating expenses have come out, the money's split equally among the contributors. That's the model but we have to get people to subscribe. That doesn't work if people are resistant to change--and there's no reason why they should be; digital comics aren't terribly new, webcomics is not new.

It's the first time I've been a publisher, and so I've been surprised and horrified by the amount of admin that's involved. We really need people to subscribe and support the new concept--a concept that really gives creators a good deal if we can make it work.

Well, and that's the thing--rights issues are tighter than ever, now that the movies are making a fortune, and the big publishers want to pay less and less to set a lower standard for the future.

I've made a great career out of working in ordinary print with retailers and such. I really want to embrace any new concept which allows maximum income to the creators. That's no bad thing, and I think as long as the public appreciate what we're doing, fans will really respond, we're going to be okay.

Is it a bit odd, working on a project like this, talking about the future, and yet the last five or ten years of your life you've been dealing with this new generation of younger fans who want nothing more than to look back and navel-gaze at the past, and V for Vendetta?

That's true--obviously when you talk about V for Vendetta is that it keeps on being popular because it's always relevant. Of course, the appearance of the mask in real life in various incarnations is also something that's spread the message. Hopefully, people know me through V and trusting what I do, will help me in establishing a connection with Aces Weekly. I never do anything I don't really believe in.  All of the stories I work on, I want them to mean something. I want them to be about something. And in the same way, Aces Weekly is about something--it's about trying to do something new and different and to expand the horizons.

Our Fifth of November Interview With V For Vendetta's David Lloyd