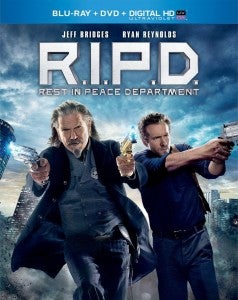 Universal Pictures today announced the DVD and Blu-ray release date for the forthcoming Dark Horse Comics adaptation R.I.P.D., as well as giving fans a rundown of the special features for the home video release.

Jeff Bridges and Ryan Reynolds star in the film about a supernatural action-adventure about two cops dispatched by the Rest In Peace Department (R.I.P.D.) to protect and serve the living from increasingly destructive spirits hiding among the unsuspecting on Earth. R.I.P.D. will be available to own on Blu-ray Combo Pack and DVD October 29, 2013 and will be available early on Digital HD October 15, 2013.

Here's a list of the bonus features, according to Universal's announcement, starting with those exclusive to the 3-D Blu-ray Combo Pack:

• 2 ALTERNATE OPENINGS • R.I.P.D. MOTION COMICS: Bringing the Avatars to Life • NICK'S NEW AVATARS: See the other Avatar contenders for Nick (Ryan Reynolds) and Hayes (Kevin Bacon). • FILMING THE OTHER SIDE: The cast and crew talk about Director Robert Schwentke's unique filming technique. • WALKING AMONG US: DEADOS & AVATARS: Explore what a Deado is, what happens when they "pop" and the effects that went into creating these unique creatures. • ANATOMY OF A SHOOTOUT: The Production Designer and the VFX Supervisor give us an in-depth look at the cinematic shootout scene on the roof of the skyscraper.

• DELETED/ALTERNATE SCENES • ALTERNATE SCENES: • NICK & HAYES TO RAID • JULIA JOGGING • MADE TO MY SKULL • DELETED SCENE: • ROY'S PARTNER SHOT HIM • GAG REEL • TRANSFERING R.I.P.D – THE MAKING OF: A "Making Of" that focuses on the adaption of the original R.I.P.D. comic and the stellar cast that came to inhabit the characters.