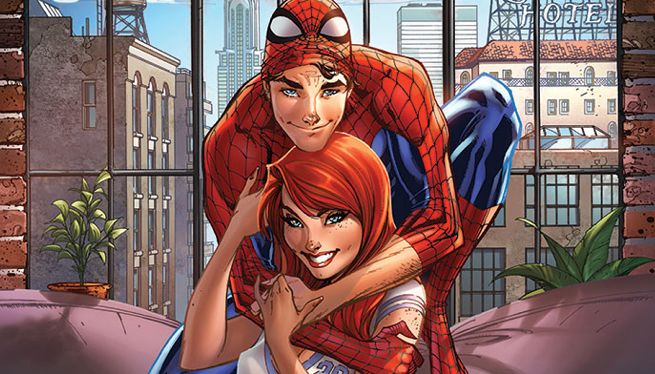 The Amazing Spider-Man Renew Your Vows represents unexplored territory in the Spider-Man universe for writer Dan Slott. He joined the Spider-Man team in the wake of "One More Day", but can now return to an era where Peter Parker was both married and a father. In the first issue he, along with penciler Adam Kubert and inker John Dell, introduces a seemingly serene life for the Parker family, but soon introduces threats both large and small.

This issue reads like a prologue to the story Slott and his collaborators intend to tell. The status quo at the start of the issue is completely reinvented before the final page. This transition between two very different circumstances leads to some incredibly quick pacing. Big changes occur and are almost instantly accepted. This isn't necessarily a bad thing, except the consequences and import of choices are never provided any room to breathe. A wide array of classic Marvel heroes are impacted in the background of Peter's story, but it is treated as table dressing for the rest of the series. Spider-Man experiences makes a choice that is deeply out of character, but is rushed past in order to reach the final page. It's an interesting decision, one that should influence the character and story to come, but here it feels minor, almost as if it were part of a recap page.

This big choice along, motivated by Peter's roles as husband and father, appears to be the heart of this mini-series. Slott is engaged by asking the questions he never could over the past 7 to 8 years writing the series. Are heroes more responsible for their family than others? How does having children change your values? How much devotion is required from a husband? But in Renew Your Vows #1, he has not even begun to answer these.

All of this setup is made more palatable thanks to Slott's embrace of the big, 90's style antics that defined this period of Spider-Man stories. It's fun and familiar, much like X-Men '92, another Secret Wars tie-in. Renew Your Vows takes the best of what Marvel Comics had to offer during this much maligned period and dumps much of the bad. Slott relishes the domestic focus of the story and makes family scenes in the kitchen and tense phone calls as engaging as the superhero antics. He also ensures that Mary Jane has plenty to do as Peter's partner. She's every bit as capable and involved as her husband.

Kubert and Dell's work on the home-life sections of the issue are much less enjoyable though. Children have never been the strongest aspect of Kubert's work and Dell does nothing to improve upon his pencils in this regard. In an early spread, Peter and MJ's child Annie, changes age, size, and facial characteristic multiple times. She morphs from infant to toddler with a face that alternates between being horrifying and adorable. Adults fare better under their artwork, but some odd expressions and proportions still sneak into mundane scenes.

The superhero elements of the comic are significantly stronger, relying more on exaggeration than reality. While seeing so many Avengers in slightly different costumes is enjoyable, it's the villains that really show off what Kubert and Dell are capable of. The inclusion of a classic Spider-Man villain makes for some exciting panels. His introduction on a splash page is iconic filled with detail and raw energy. That revelation is too good to be spoiled here. The other villain of the issue embodies the hyper-powerful blandness of many 90's villains, but is just colorful enough to be amusing.

Renew Your Vows #1 is an uneven issue from all creators involved. Slott capably embraces the fun and strangeness of this period in Marvel Comics history, but his pacing leaves something to be desired. Kubert and Dell, on the other hand, are at the top of their game as long as they are portraying characters in masks. The story's arrangement as a prologue leaves a lot of interesting ideas to be explored and time to iron out the flaws. It's an issue filled with potential, but it's fulfillment is far from certain.

Ranking of Kings Team Reveals the Show's Most Important Message