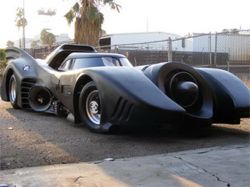 It couldn’t turn on a dime. It had a faulty security system that even a bunch of felonious circus people could hack into. And if you stood to close to its exhaust system, you’d catch aflame. But for many, the Tim Burton Batmobile was the best bat-vehicle of them all. Every kid who saw the 1989 version of Batman wanted it. Even Drew Carey devoted a few episodes to his character winning one of the Burton-era Batmobiles.

This weekend, fans will get a chance to own a re-creation of the 1989 Batmobile at the 36th Annual Las Vegas Spring Collector Car Show. The auction will be held by auctioneer company Kruse International at the South Point Hotel and Casino.

No- the recession isn’t causing Bruce Wayne to sell off some of his crime fighting equipment. The auction is for a replica Batmobile that is fully loaded… literally. According to the auction’s listing, this Batmobile is “an exact recreation of the 1989 Batmobile,” right down to its 50 caliber machine guns.

Other features of the car include automatic canopy, Mickey Thompson tires, and yes, even the dreaded afterburner that doubles as a handy device for making s'mores. The vehicle has an automatic transmission, and despite its design-flawed tendency to make awkward turns, this Batmobile is street legal. The event begins tomorrow at 1pm and runs through Saturday.