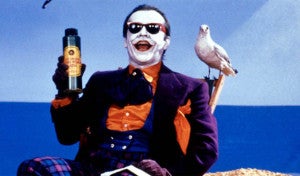 UPDATE: The Playlist claims that the report is "100% untrue." Click on the link for (slightly) more.

“Jack has — without fanfare — retired,” an anonymous "Hollywood film insider" told the site. “There is a simple reason behind his decision — it’s memory loss. Quite frankly, at 76, Jack has memory issues and can no longer remember the lines being asked of him. His memory isn't what it used to be."

He reportedly turned down Bruce Dern's role in the forthcoming Nebraska for this reason.

The three-time Academy Award winner last appeared in 2010's How Do You Know, reportedly also has no plans to confirm his retirement, or to disappear from the spotlight; he'll still appear on the Oscar telecast if asked, they say, and retain his courtside Lakers seats.

“He’s not retiring from public life, at all. He just doesn’t want a tribute,” said the insider. “He’s happy to tacitly join the retirees club like Sean Connery.”

Batman Star Jack Nicholson Has Given Up Acting? Not So Fast...