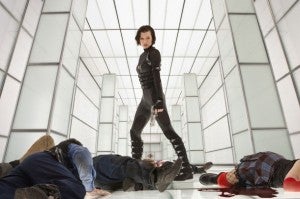 Screen Gems has released a new trailer for the upcoming video game adaptation Resident Evil: Retribution, out in September. The fifth installment of the series features Milla Jovovich and Michelle Rodriguez reprising their roles from the first film. Ten years down the road, each of the characters has died at least once but...well, it's a video game movie. You get another life.

Check out the trailer below, made available via Dread Central, and let us know what you think. The last Resident Evil film was a huge step up from the series' lackluster third installment, but generally these things hit and it's hard to understand what someone as talented as Jovovich is doing spending all her time on them.