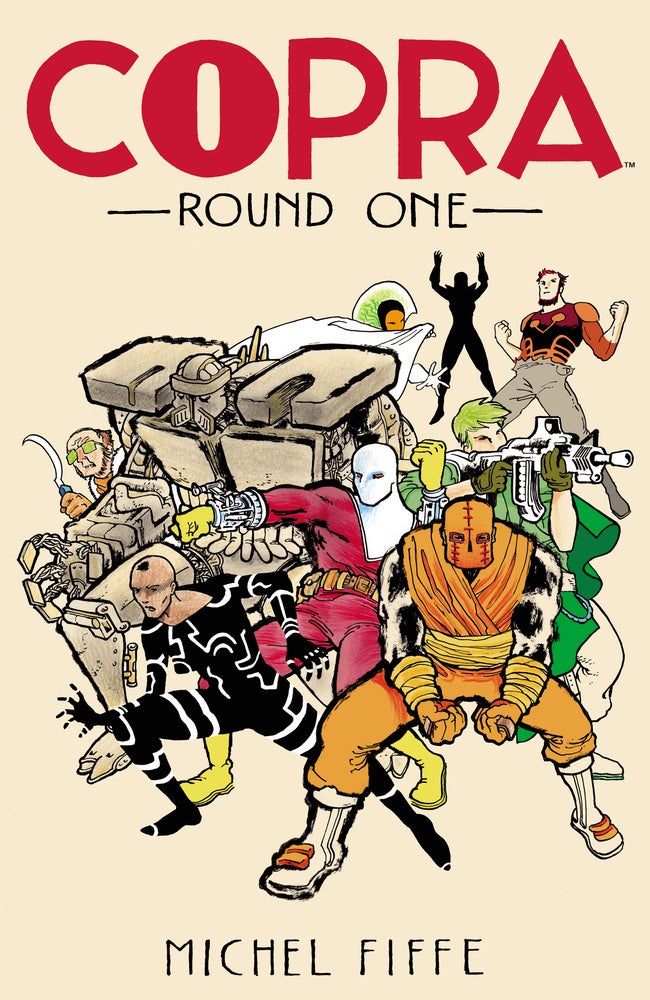 How would you respond if I told you that the best comic being published right now is sold on Etsy?

With a high degree of skepticism? Utter disbelief? Laughter even?

That's completely understandable. I responded the same way when I first heard that. Then I read COPRA. Now I'm here to tell you that the best comic being published right now is only being sold on Etsy and a select number of comic stores. Or at least it was until today with the release of COPRA: Round One, collecting COPRA #1 - #6.

COPRA is written, drawn, colored, and lettered by Michel Fiffe and published by Bergen Street Comics in Brooklyn. It began as homage to John Ostrander, Kim Yale, and Luke McDonnell's Suicide Squad published by DC Comics between 1987 and 1992. The story follows a group of misfits, assassins, and thugs who are all part of a government outfit used to take on dangerous missions. It's a concept that creates endless opportunities for rich, diverse characters, stories, and settings. The original Suicide Squad is still one of the best ongoing series of the 1980s, a period that also produced Frank Miller's Daredevil and Alan Moore's Saga of the Swamp Thing.

Some characters work as analogs to Ostrander's greatest inventions and re-creations - Sonia Stone as Amanda Waller, Lloyd as Deadshot, Jorge Harkness as Captain Boomerang. Fans of the older series, like myself, will be able to pick up on various allusions. That knowledge is completely unnecessary though because every idea and character in COPRA enters the comic fully formed.

Fiffe is not scared to wear his influences on his sleeve. He's proud to recognize the artists who helped shape him. The ideas of Jack Kirby, Steve Ditko, Walter Simonson, and Frank Miller can all be seen flitting through these pages. Their mastery of composition, panel structure, and visual language are the foundation from which Fiffe constructs his comic.

COPRA is far more than homage or commemoration though. The series does not imitate Suicide Squad or reference the greatest artists of the past century. It uses these ideas and tools as its framework and uses them to springboard into a new comic that is entirely its own – into COPRA.

It's difficult to pick a starting point when discussing COPRA. There's a lot happening in this comic and it's all very effective. The first issue starts the series with a literal bang, a very, very large bang. Half of the initial team is killed and the rest are framed for genocide when their assailants destroy an entire city with a mysterious artifact. The issue acts as a bold thesis statement. It declares that COPRA will feature big action, psychedelic storytelling, and authentic human drama.

There is not a single action sequence in this volume that doesn't thrill. Fiffe plays with the comics medium to make the action of fisticuffs, shoot outs, and explosions land with the greatest impact. In the sixth issue, eleven distinct characters are involved in a brawl. It's easy for even experienced artists to loose track of characters and momentum in a sequence like this. Fiffe keeps the reader aware of what individuals are doing and creates a cause-and-effect relationship between every panel. He applies novel compositions to tell multiple stories simultaneously. At the top of page three, Fiffe presents an overhead shot of nice characters and their current positions and interactions. From there the sequence focuses on individual interactions and cuts away to show new characters when they enter. A page with four horizontal panels each displays two people in combat, but includes other characters and details in the background. There is never the slightest amount of confusion about what is occurring despite the hectic nature of the combat.

Smaller action sequences are every bit as effective and sometimes even more masterfully communicated. A small scuffle between Gracie and Jorge takes place in two pages. The interactions between the two results in a constant tumble of motion. A peanut thrown into his mouth awakens him and he lurches forward. He lunges at her and she throws him, creating a perfect circle between their bodies in two panels. The circular effect of those moments is reinforced in the page composition, a slightly imbalanced 2x2 grid.

COPRA doesn't rely on purely physical battles to create action though. Magic and science fiction play potent roles in the story. Ditko's influence is shown here. He was praised for being one of the most psychedelic comics artists of the 1960s and Fiffe's work in COPRA tests the very boundaries of reality. When Vincent and Xenia investigate the properties of the artifact discovered in the first issue, Fiffe experiments with the comic form itself. Panels overlap and replicate one another in multiple colors and shadings. A long panel folds in upon itself and twists the forms of characters within it. It is difficult to fully relate the experience.

Effects like this and others created by Fiffe are truly unique to the comics medium, impossible to replicate with the use of prose, film, or animation. He experiments with panels and geometry to reform pages and contort forms. Color, line, composition, no tool is out of bounds when science from other dimensions or sorcery is at play. Some of the sequences in COPRA defy description; they must be experienced.

With all of the strange happenings and explosive action, it could be easy to overlook that COPRA is a comic with a lot of heart. Throughout the insanity of this adventure, Fiffe never once loses track of the characters experiencing it. They all have excellent designs and engaging powers but those things don't actually create a character. Natural dialogue and internal monologues transforms them into fully realized people.

At the start of the very first issue, there is a conversation about what Dale (the armor-encased teen codenamed Wir) is getting his mother for her birthday. A friend chides him for being cheap and another reassures him that she would enjoy a cake. The entire conversation is small – tiny - both in scope and consequence. It's also incredibly humanizing. Despite their odd appearances and powerful traits, the members of COPRA are never bigger than life or gods; they are always people.

And then there's the ending of COPRA: Round One. Every time I reach the final pages of COPRA #6 I can't help but let a few tears go. Fiffe is great at constructing complicated compositions that boggle the mind, but he is also aware of when simplicity will serve best. One page composed of only four panels, four colors, and ten words will break your heart and make you smile. It is an ending that is both shocking and, in retrospect, entirely inevitable. It is simultaneously brutal and beautiful, all because it encompasses a single human being's doomed journey.

COPRA: Round One completes several characters' arcs, but is only the first half of Fiffe's first epic story. It is an introduction to Fiffe's work that made me a fan immediately. It is well crafted and raw, beautiful and tragic, classical and contemporary.

It is that fusion of the old and the new that makes COPRA such an incredible comic. It recognizes the work of masters and builds from their legacy. Equal parts homage and invention, it is a comic that is unlike anything else being published.

This is it. COPRA is as good as comics get.

COPRA: Round One can be ordered from Bergen Street here.

You can read the first issue for free at Fiffe's website here.

REVIEW: COPRA: Round One - The Best Comic You Didn't Know About