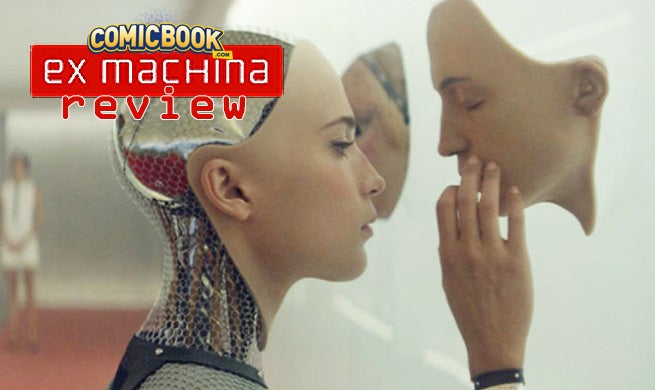 Ex Machina may initially seem like one of those "seen it before" films if you listen to a brief synopsis or look at the posters. Artificial intelligence, science fiction, all that jazz... Well, it's nothing you've seen before. It's smart. It's creative. It's a masterpiece.

Caleb (Domhnall Gleeson) is a coder. He works in an office we see for a brief moment at the beginning of the film, where he finds out he is the winner of a competition to spend a week with the creator of artificial intelligence (and the owner of the company he works for).

Quickly, he is flown out over a mountainous estate to Nathan's (Oscar Isaac) underground, top secret laboratory which Caleb can never say a word about, courtesy of the Non-Disclosure Agreement he signs in order to participate. The facility has locks on each door, some of which Caleb's keycard can open, some of which it cannot. Cameras decorate the ceiling corners. There are no windows in the bedrooms. Occasionally, the power cuts out and the facility locks down completely. It's a claustrophobic person's worst nightmare. Nathan quickly tries to make Caleb feel at home. When they meet, Nathan goes on an awesome rant about how cool it must be for Caleb to be in this moment, meeting a idol and being part of such an important experiment, but Nathan wants to just be friends. It's a real bro moment.

The events during the experiment, though, makes the bro moment questionable. For the next week, Caleb will interact with an artificially intelligent being and decide whether or not he can tell that he is talking to a computer. It's the deciding factor on whether or not Nathan has truly created consciousness.

Ava (Alicia Vikander) is the name of the computer given the frame of a human body, only missing skin everywhere but her face. Each day, Caleb and Ava sit down and get to know each other. Some attraction develops which is reminiscent of Her, but more plausible because this time as there is eye-contact and a face to associate the feelings to. On top of that, the A.I. grows. Ava starts wearing clothes and drawing pictures for Caleb as sure learns more about him and wants to impress him. The plot starts racing when power cuts in the facility allow Ava to tell Caleb that he can't trust Nathan off-camera.

Nathan is the most interesting character. Somehow, he doesn't come off as intolerably cocky, but rather impressively confident. It's a confidence you usually observe when watching the "suave rich guy in a suit" character, but this time it's a secluded, bearded man who rarely wears anything other than tank tops. By day, he's a genius who created an intelligent being and spits out science jargon with Caleb that the average movie goer won't understand and by night he is a troubled alcoholic who sips too heavily for his own good.

Half way through the film, you'll be painfully wondering what's actually going on. Is Nathan an artificially intelligent being? Is Caleb? Is Ava telling the truth about Nathan being untrustworthy? Is the whole thing a set-up to see if Nathan can trust Caleb? Maybe. Maybe not. It's a battle of brains in Nathan's facility, but who will win? And how?

Those questions are what drive Ex Machina. The best part: they all get answered by the end of the film. It's refreshing when a film can create so much suspense without guns banging and fists flying. Writer/director Alex Garland, in his first bout as a director, puts together a film that takes the right amount of time to explore each element. Aside from Caleb winning the trip from his office, Ex Machina doesn't put any character's story on screen from before the week at the facility. Rather, the characters are developed in front of us in the underground research facility for a week which we watch for just under 2 hours. By the end, we know who they are.

Garland was working with just a $15 million budget. That was hardly even a speed bump for him. He wisely set the entire film in the facility, reducing location costs, but crafting a story from which provided a mind-boggling ride with beautiful shots. Vikander is just the right amount of robotic as an artificially intelligent and growing being. Her performance paired with the effects make for an excellent on-screen presence.

There is a pair brutal scenes in Ex Machina. They earn the film an R rating, but they're completely necessary. Plus, the more relaxed language an R rated film allows is tossed back and forth between Isaac and Gleeson, making the lack of sci-fi action preferred. Isaac masterfully carries the film into it's climax which, by the way, perfectly fits the tone of the whole shebang.

Impatient movie-goers will have a hard time being content until the payoff, but those who enjoy character driven story telling, this one is for you.

Bottom Line: Ex Machina is a masterpiece. Garland puts together an original bit to an over-crowded genre, carried by Isaac's entertaining, spectacular performance. 9.0/10

REVIEW: Ex Machina Is As Smart As Its Own A.I.

Star Wars: Liam Neeson Addresses Another Return to the Franchise