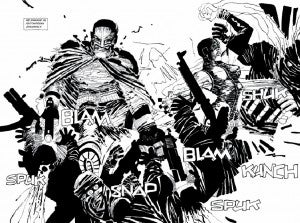 When Frank Miller first introduced the idea of a Batman propaganda comic wherein he fights Islamic terrorists, it seemed a bit crazy.

Granted, he was right that both Superman and Captain America had punched out Hitler in the pages of '30s and '40s-era stories. Still, to argue that those stories weren't a byproduct of a less cynical time seemed a bit silly. The title that started to be bandied about--Holy Terror, Batman!, a reference to Burt Ward's "Holy _____" catchphrase of the '60s TV show, made the whole thing seem even more preposterous. Still,in interviews Miller sounded totally earnest. As a New Yorker, he said, he had seen the ugliness and the hate up-close. Patriotism was, to Miller, part of the recipe for bringing Al Qaeda to their knees.

And, of course, in both of those old stories the heroes in question were on the offense, taking the fight to the Nazis in their homeland. No longer a DC title, and therefore lacking Batman, Miller's Holy Terror (out this week) is a totally different animal. Miller's fictional "Empire City," neither Gotham nor New York exactly, is a city under siege in the graphic novel--a war zone where there's dust and fire in the air, as dozens of suicide attacks are launched near-simultaneously by an orchestrated gang of Islamic terrorists with "stinger missiles and no regard for human life."

Holy Terror is both the first outing for publisher Legendary Comics (a division of Legendary Pictures, who have had their hands in comic-related properties for years including the film adaptations of 300 and Watchmen) and released just in time to capitalize on a wave of morbid nostalgia that's taken over the media and the public imagination following the tenth anniversary of the September 11 attacks. With projects coming up from Paul Pope and Matt Wagner, Legendary has positioned itself as a player right out of the gate in a way that no comics startup has since the early days of imprints like CrossGen and Black Bull. They've also got a pretty solid relationship with Miller, having a hand in 300: Batle of Artemisia when it hits cinemas. All that said, this has all the hallmarks of another dud from Miller following on the heels of his last two much-hated Batman projects and the abominable reviews of his film adaptation of The Spirit.

As with all of Miller's recent work, the art is highly stylized and reminiscent of his Sin City style. While there are moments where the speckled, paint-splattered look of Miller's work really aids the story (such as immediately following a blast when the air is described as so thick that breathing it in causes a character to throw it back up), there are places where his art style doesn't serve this story well at all; it's often nearly impossible to understand what's going on and there's often little or no background work. It's a style choice, of course (and much has been said about the less-is-more effect in Sin City, so the style is hard to question except for when it simply doesn't work), not laziness...but at this point Miller's style has become so self-referential that it's almost parody and there are times in this book where it's better suited to being pinups or something displayed in a pop art gallery than it is at anything resembling storytelling. There are stretches of several wordless pages at a time filled with frantic images that make no narrative sense and disrupt the storytelling completely. Some seem designed to make the reader think, but as often as not they come off as nonsensical--arbitrary collages of images that represent Miller's vision of America.

The "splash of color" approach that he's taken with Sin City and The Spirit film is on display in this book--but it too seems like an arbitrary gimmick most of the time and only really adds anything to the narrative in the predictable climactic sequence.

At the same time, he periodically comes out of this to present something that's genuinely interesting, and the better moments (including a six-page splash featuring the faces of everyday people affected by terrorism and some truly kinetic, impressive storytelling at the beginning of the book) are both clever and sometimes even touching, lending what is otherwise a foul-mouthed and violent book a poignancy and intelligence that's frankly surprising from a book that started out as being called "Batman Vs. Al Qaeda." Frankly, one has to wonder whether it would have happened at all if Miller hadn't been working on The Dark Knight Strikes Again in 2001 when the World Trade Center fell. 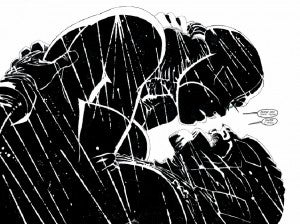 This book features The Fixer and Cat Burglar, who clearly used to be Batman and Catwoman in the first iteration of this story. That means that there's been an elaborate and fully-costumed sex scene between those two characters twice in two weeks (kinda). Miller's version of the sex scene is, predictably, less tender. The pair jump from rooftop to rooftop, beating the crap out of each other for twenty or so pages of the book and eventually surrendering to their mutual attraction moments before dozens of simultaneous suicide bombers strike Empire City. The pair are drawn in instantly, as a bomb filled with nails sends shrapnel toward the rooftop and penetrates Cat Burglar's knee.

I will credit Miller this much, though; as obvious as it is who these characters once were, they aren't those people anymore. They aren't even the bitter, violent and somewhat crazy versions we've seen Miller write and draw so many times before. The Fixer and Cat Burglar are like Batman and Catwoman through the filter of Mark Millar. There's even a bit of a Kick-Ass vibe to The Fixer's costume. And while both the origins of this comic and Miller's relationship to Batman make it pretty obvious what he's channeling here, it's clear to see he wasn't lying when he started telling interviewers that this stopped being a Batman story at some point. Besides the gleeful torture scene, he has the character holding twin handguns and taking out as many stereotypical, turbaned Arab terrorists as he can find.

Politically, it's probably better for all involved that it isn't a Batman story because while (in keeping with the way Miller often draws politicians and other public figures) everyone looks a little nightmarish, unbalanced and generally unattractive, the Islamic community in particular takes some lumps with nothing to speak of on the other side to temper the argument with "It's just the radicals--normal people aren't really like this." In fact, we see some pretty brutal "regular" people all around in Holy Terror. And the ultimate message of the book seems to be that, whether we like it or not, terrorism works.

Remember when Batman Vs. Al Qaeda seemed a little crazy? Holy Terror ups the ante, and not in a good way. Miller is capable of achieving great heights, and has often elevated comics as a medium when he's done so. There are even a few sparks of real brilliance here, but Holy Terror mostly appeals to the lowest common denominator and succeeds only as a tongue-in-cheek wink at itself. The book is so black-and-white (literally and figuratively) that it's difficult to take it at face value and it functions best as a modern interpretation of those old propaganda comics Miller talks about. Unfortunately there's this sense of earnestness and bile that you can't shake while reading this book, and it seems evident that Miller is not trying to be clever about it at all; this is more manifesto than metaphor. And that, folks, is why the book falls flat.